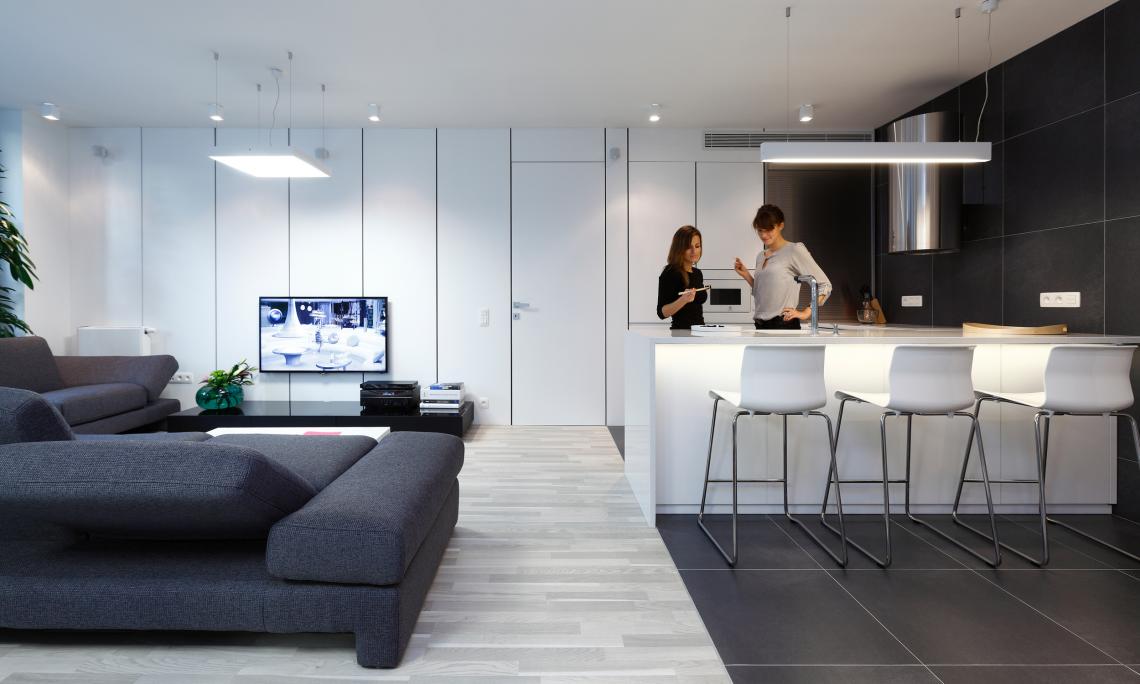 We redesigned non-functional disposition of three bedroom apartment so that it can serve to two independent tenants. There are two night zones, each with bedroom, storage and bathroom with WC. Between the units is a common entry - day zone.

We redesigned non-functional disposition of three bedroom apartment so that it can serve to two independent tenants. Apartment has two night zones, each with bedroom, storage space and bathroom with WC. Between the units is a common entry and day zone. The original plan included almost 13 m² of useless hallway floor area, which we canceled and saved square meters "invested" into the rooms. We added 13 meters of usable space to the room area, which at the current price per square meter means "benefit" worth € 30,000.

Single furniture design cancels optical barrier between the functions of the apartment. Kitchen set visually passes into the living room, from the perspective of the living room a wall behind the TV ends up in stainless blinds in the kitchen. White bedroom door flushes with white tiles behind the TV and also withe white door of a built-in refrigerator and a kitchen cabinets. 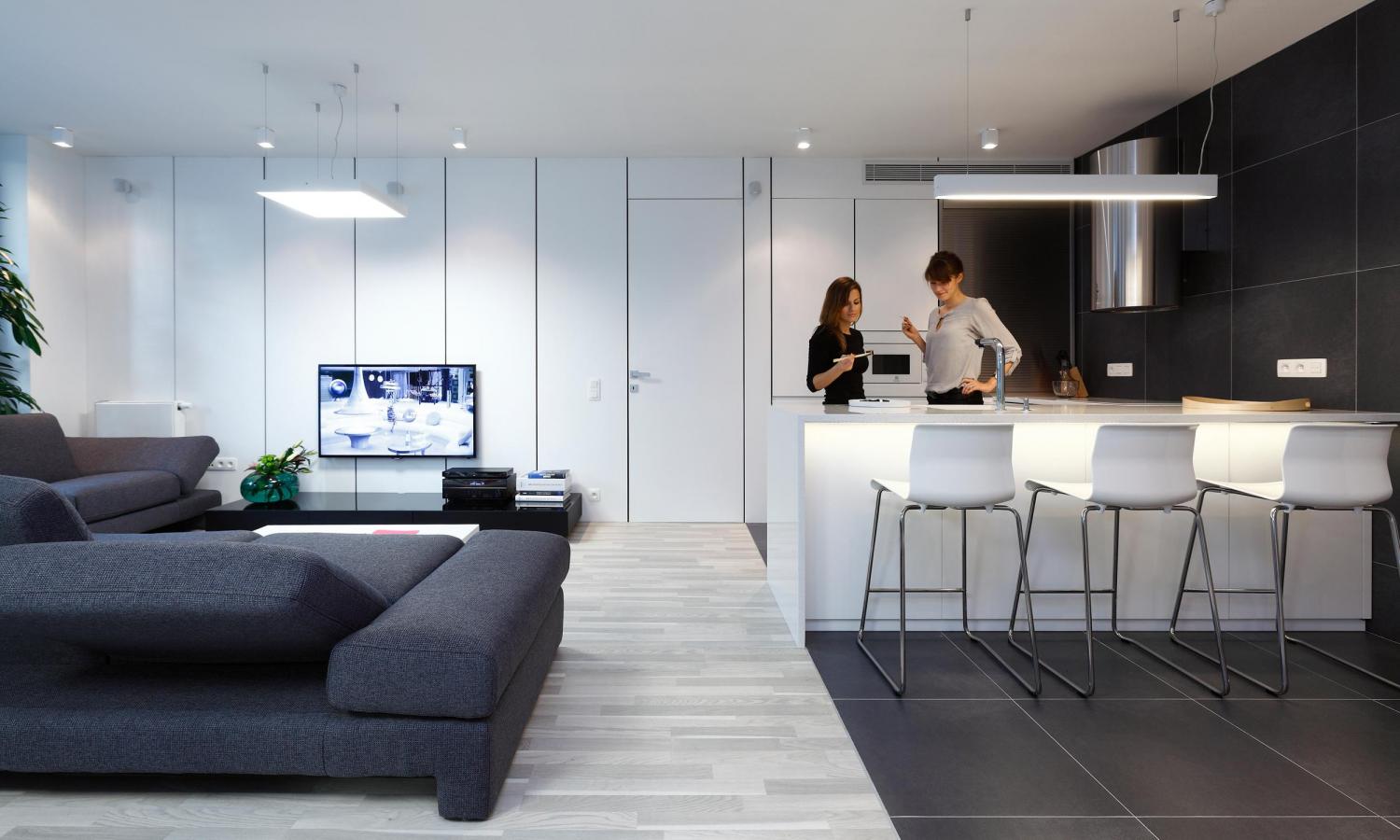 White kitchen of an apartment for rent formes a part of daily space, therefor we paid special attention to the design. Worktop with sink made of white artificial stone and we added white kitchen appliances for perfection to the matt white doors. In totally clear white kitchen stand out stainless steel accessories - digestor and blinds.

See also other all Kitchens 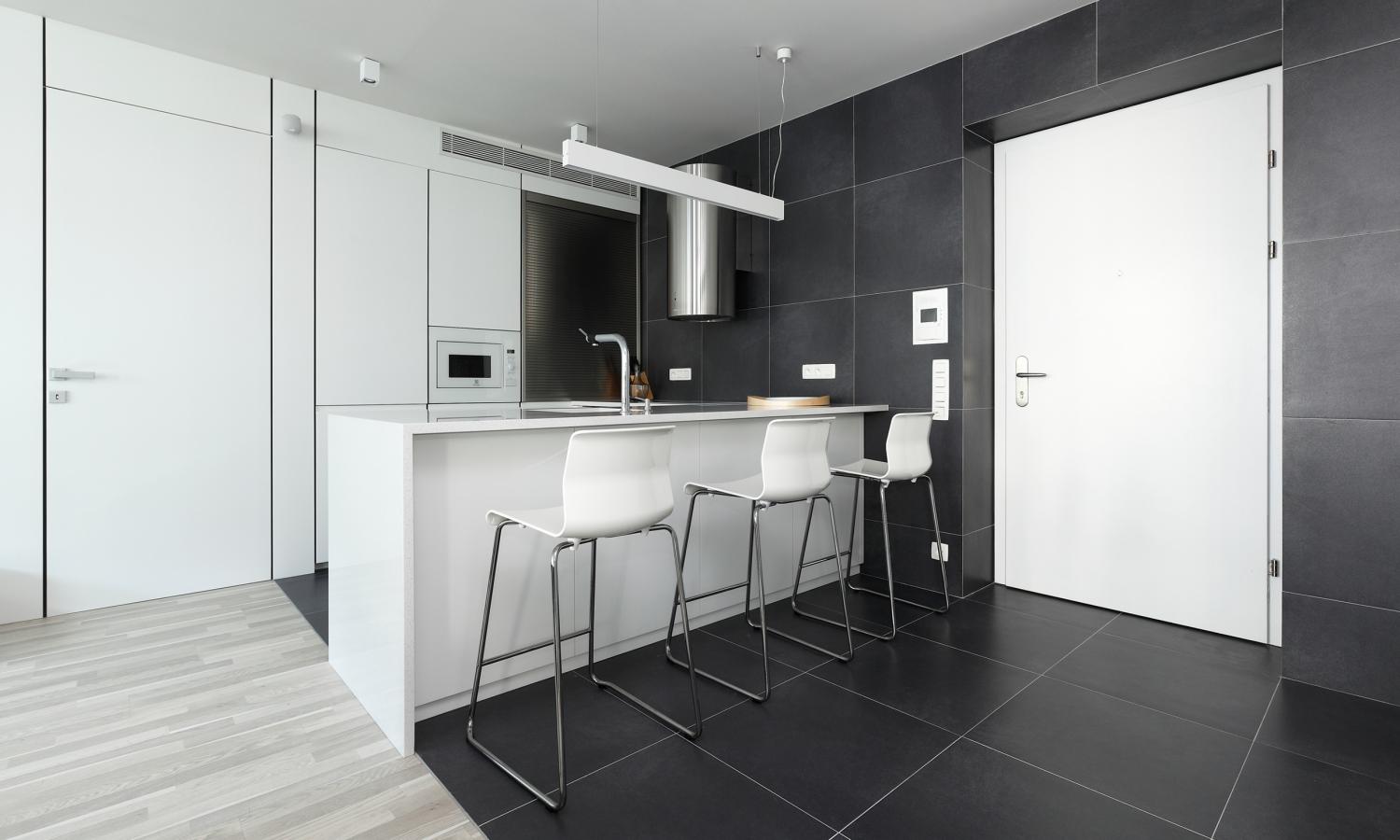 See also other all Kitchens

Walls tiling of the central area of daily space

Wall tiling acts more exclusive and is more durable than an ordinary white color blade, so we designed it on the all walls in the daily section. On the livingroom wall are located tiles made of white panels with integrated door into the bedroom, which also continue to the kitchen cabinets. Entrance and kitchen area is lined with a gray gres tiles. 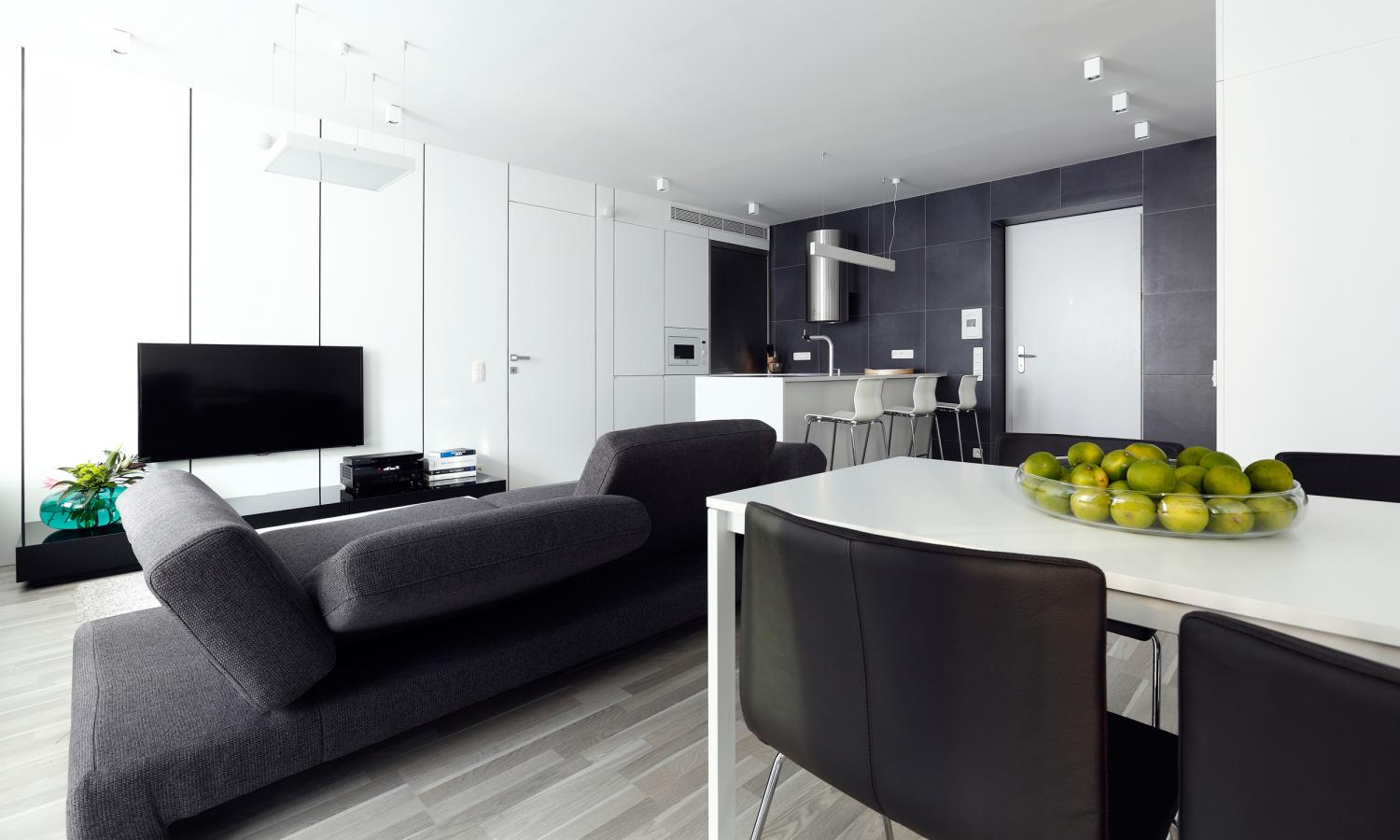 Gres in the kitchen and foyer

The entrance area and kitchen are together the most exposed spaces, therefor we used there undistructible gres material dark gray color, the same as in bathrooms. From the tiling, which supposed to be primarily functional, became a strong aesthetical element which visually separates spaces and affected the appearance of the room. 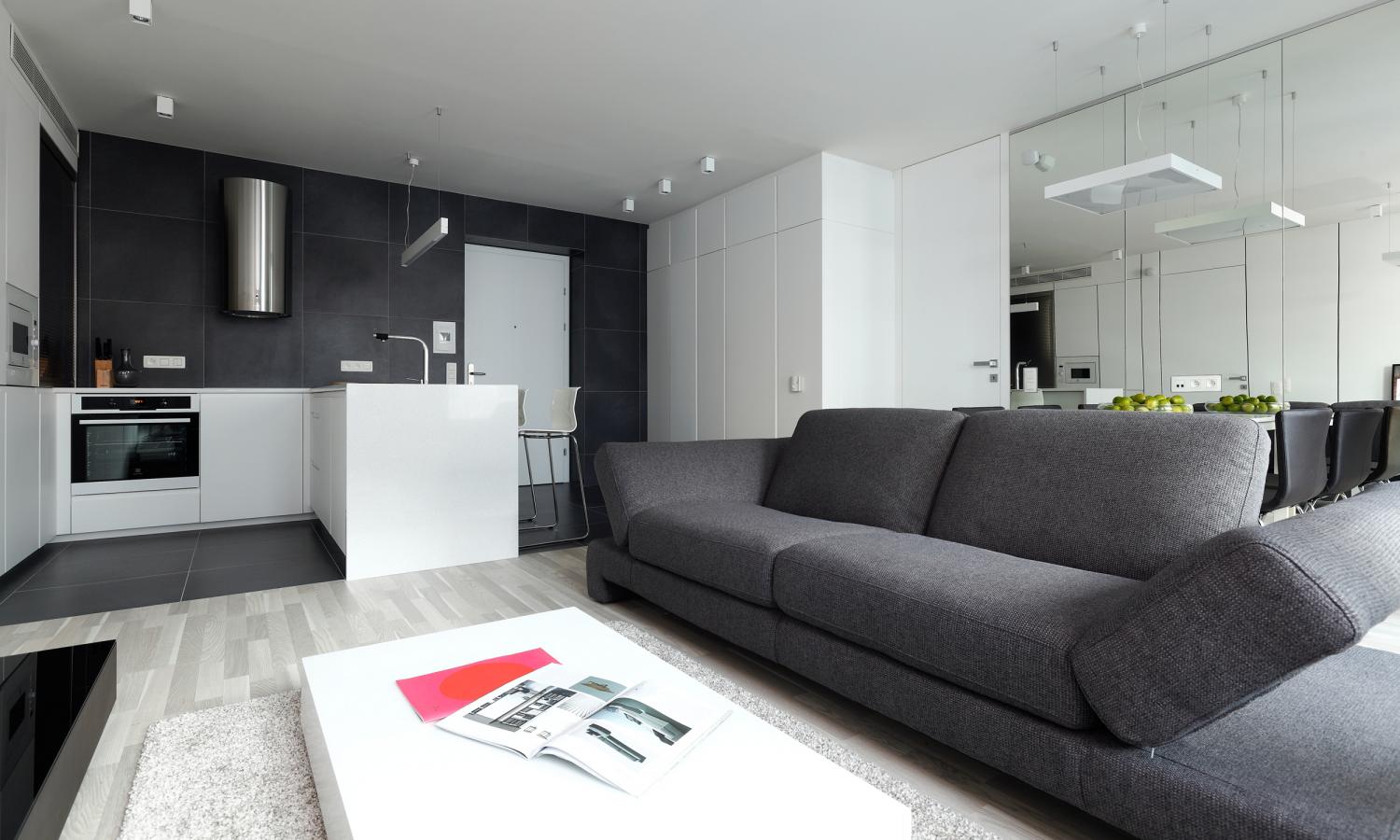 The entrance hall as a part of the central space

The entrance hall of the apartment creates one space together also with day-zone, so we desugned cabinets with a similar design as the rest of the room. On the left side there is a wardrobe which includes storage space for coats, pull-out shelves for shoes and space for a washing machine with dryer. On the right begins kitchen set with a bar seating.

See also other all Entrance halls 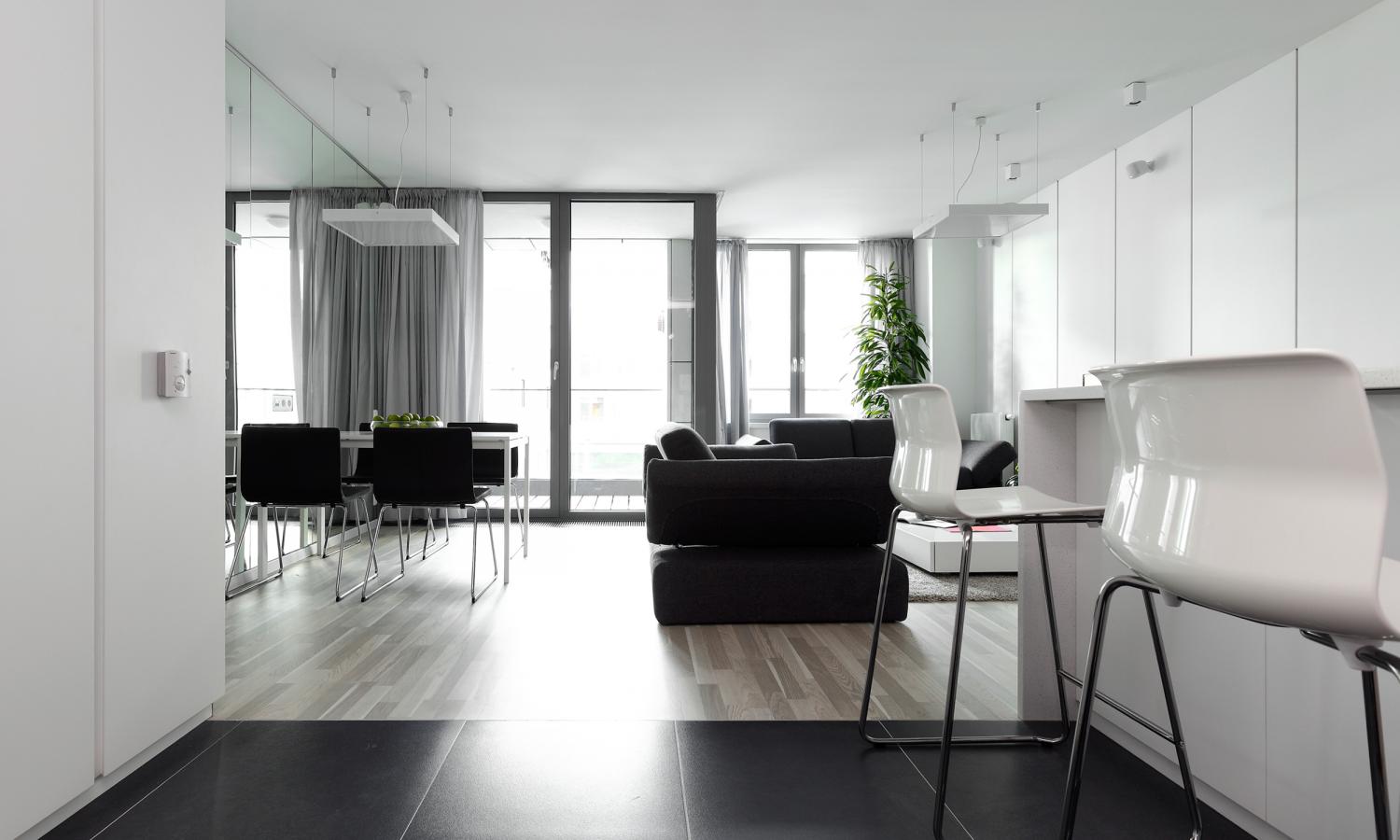 See also other all Entrance halls

At the first sight, monochromatic interior universal tunes with its inhabitants and respects the charisma of the space using any kind of supplements. Removing partitions we managed to get daylight into the all parts of the apartment and using light materials we kept the light there, mirror optically increased the area of the glass wall. 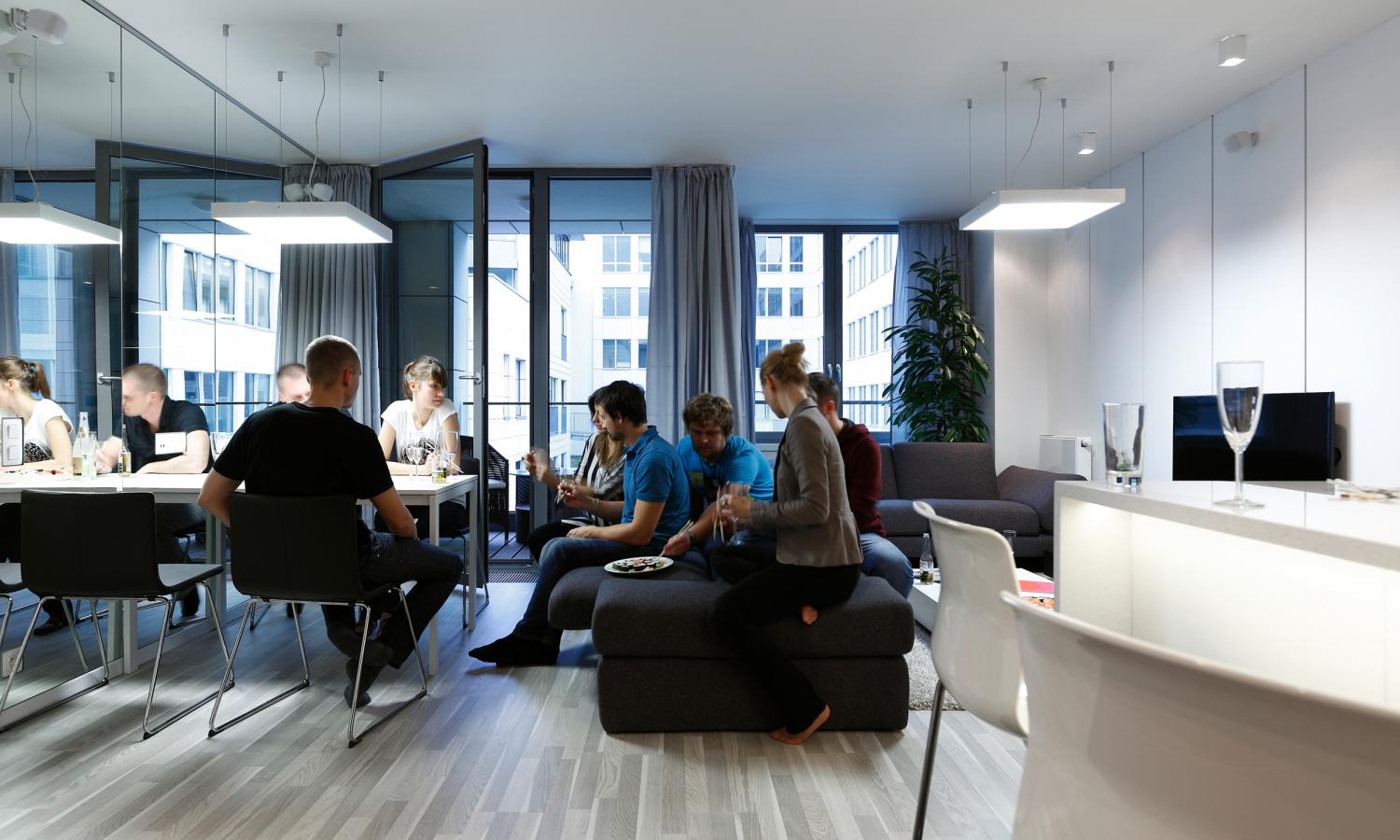 Backlighting of the apartment with daylight

Radical open space allowed penetration of natural daylight to places where were previously dark hallways. Absence of foyer did not take off the quality, since the space meets all the usual requirements of the foyer. Wardrobe at the entrace offers a place to hang coats and shoes. 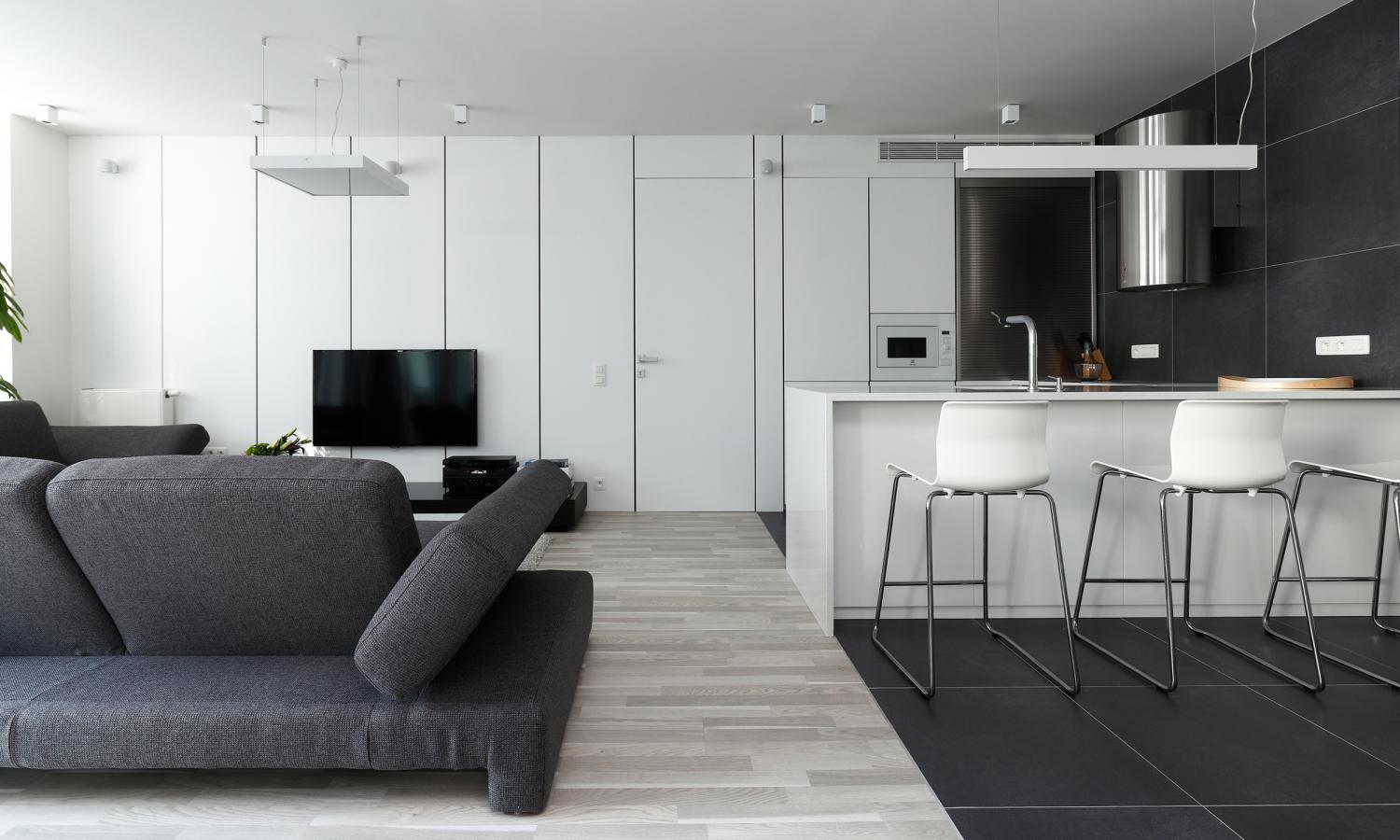 Apartment for rent will serve to two independent tenants, so we adapted the plan to this function and did not include hallways. In the middle of disposition is located shared daily and entry space, from which you find doors to the night-zones placed opposite each other. Each bedroom contains a bed, storage and sanitary facilities. 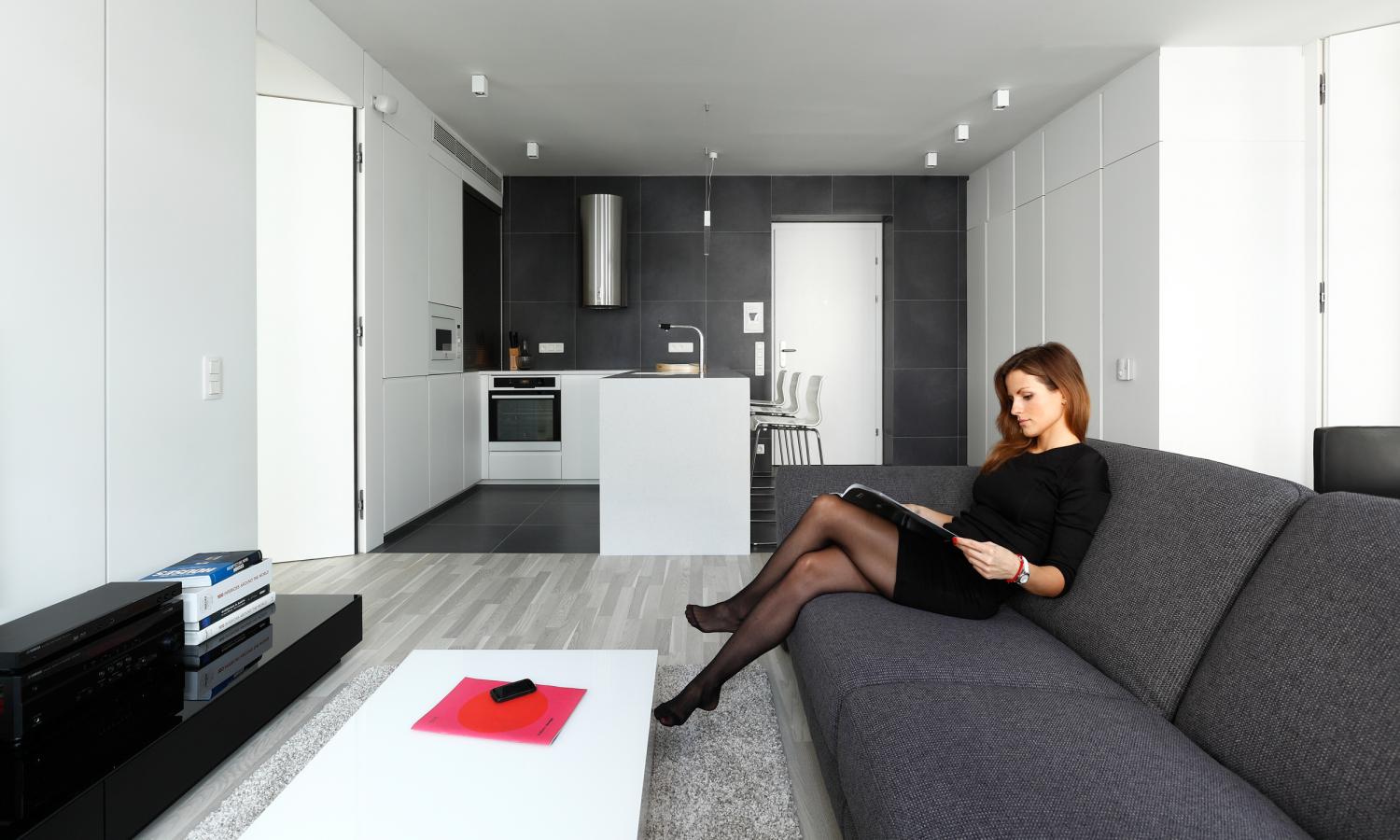 Daily space has at its shorter side glass facade oriented to the courtyard multifunctional complex. For an optical view enlargement we placed a mirror tiles on the walls close to the dining table. It visually multiplies the length of the facade and also the room. To ensure the privacy you can shade the windows with curtains and drapes.

See also other all Livingrooms 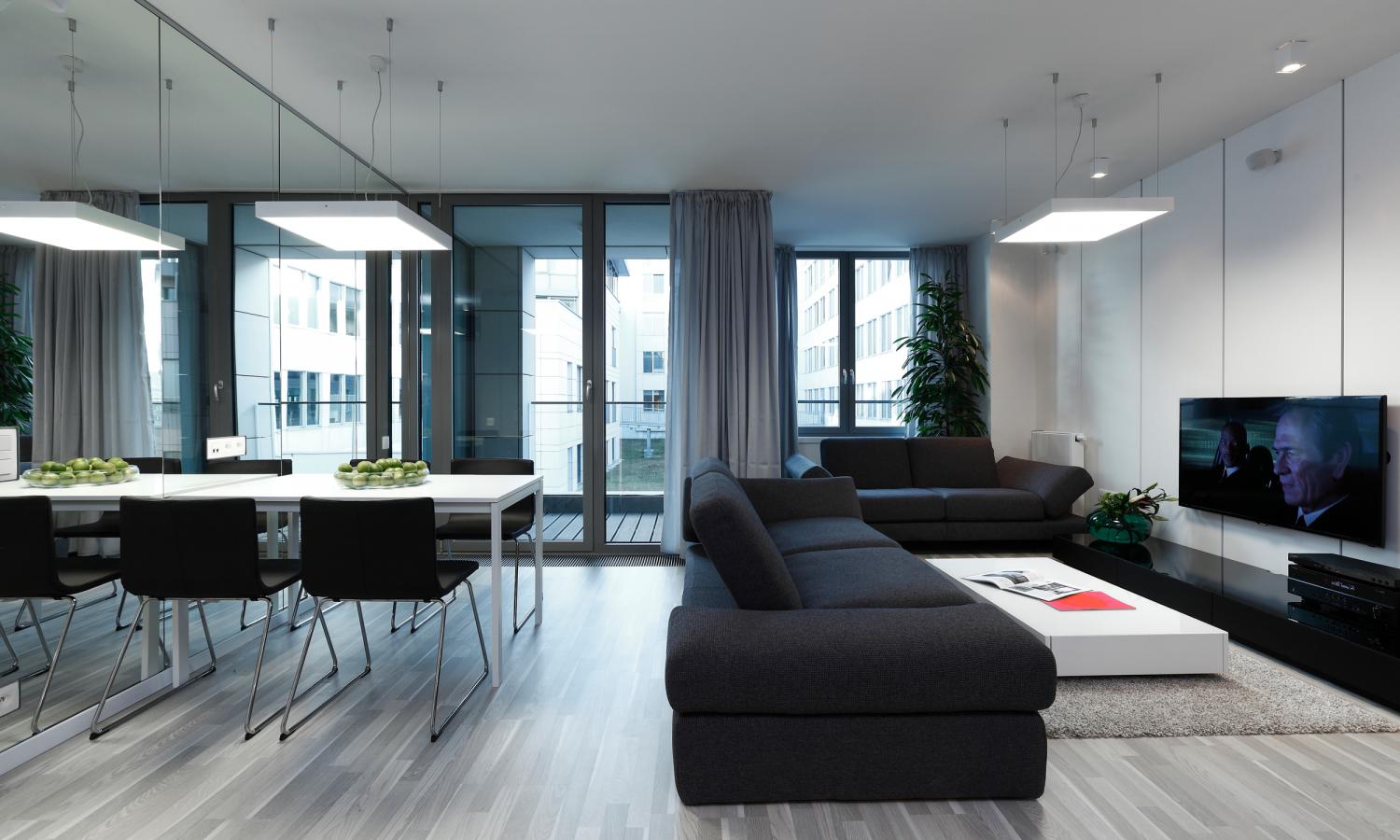 See our blog: Visualization or execution?

See also other all Livingrooms

Tuning of furniture of various functions

To preserve the elegance of the central area, which includes entrance, kitchen, dining and living area, we designed each piece of furniture in the same style. Wardrobe in the foyer, kitchen set, bedroom doors and also wall tiles behind the TV so we designed from the same material - white matte finish.

Living room seating consists of two separate fabric sofas, which we consider to be nicer solution than corner sofa. Sofas allow angular variations of rear and side arm and backrests. Seats can perform the functions of beds for occasional visits and also expanded the seating space for a dining table.

Hanged technical lamps are from the same "family" throughout the day part. In places where it is needed more lighting for working, we proposed neon lamps, which generate strong sorce of diffuse light, which do not create shadows. Diffuse sources are supplemented with halogen spotlights on the ceiling, creating strong contrasts and interior warmer feeling.

While this is a cliche, but mirror wall really expands the space, and especially in this case it helped us to avoid "wagon" effect compartment. From the view of the entrance door mirror multiplies the window area, while sitting at the table it multiplies number of people in the room :-) And also allows them to watch TV from all corners of the room. 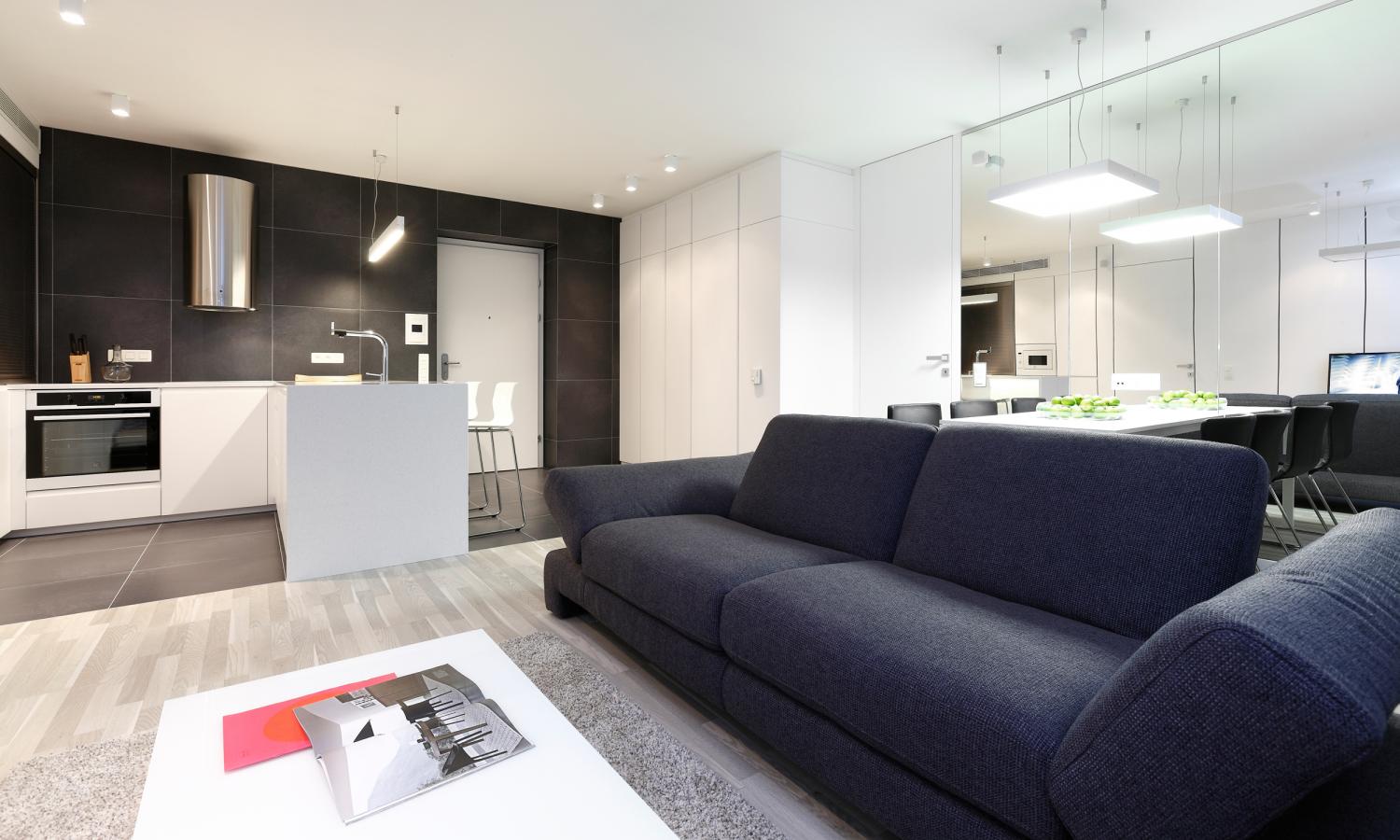 Central space of the apartment from which is accessible loggia is sized for 13 people. Loggia acts spacious and it can comfortaly accomodate two chairs and table. The apartment is located near the entrance to the shopping mall close to the "egg". Unlike the apartments facing the Danube this apartment is silent and restful. 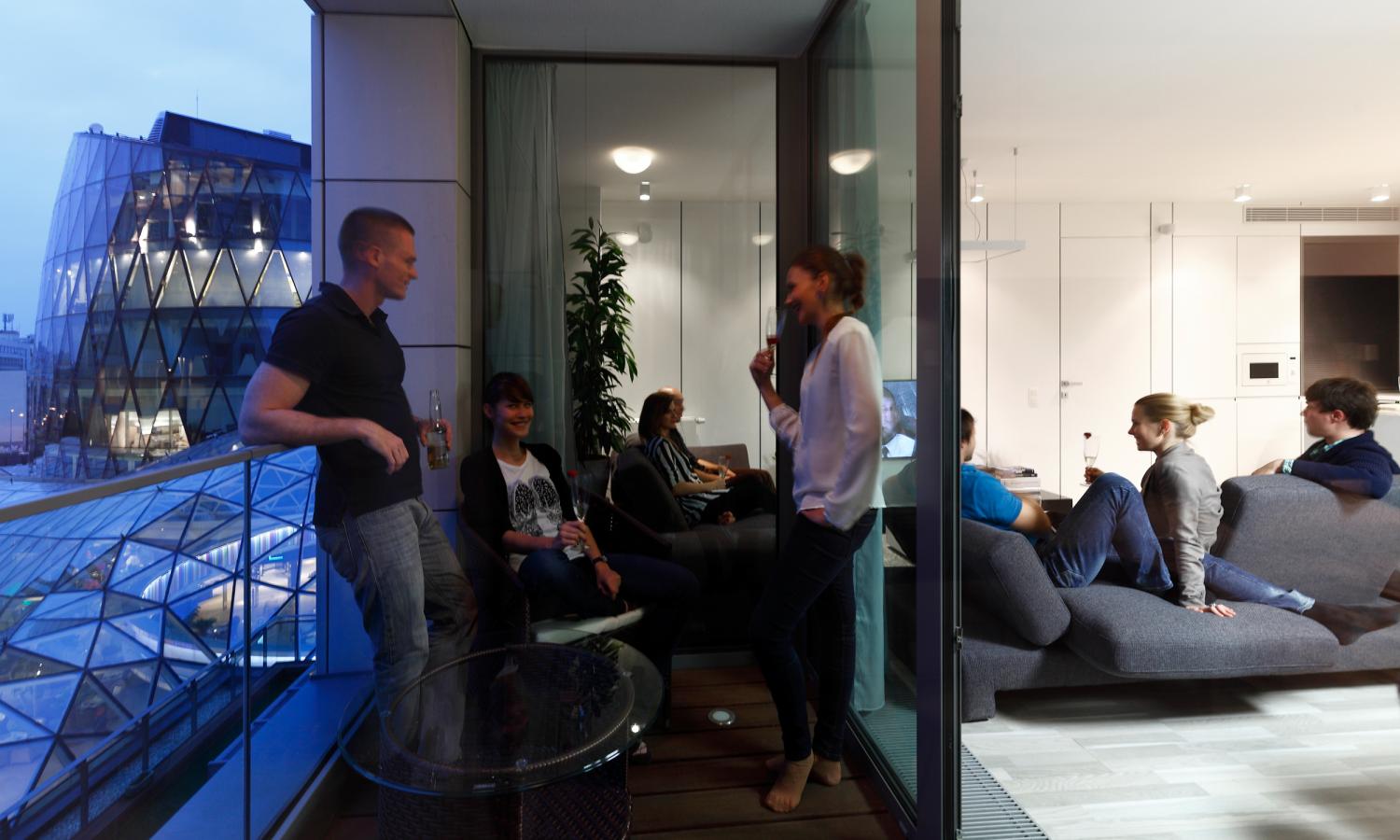 First bedroom of the apartment

Considering the floorplan proportions of the room we placed storage space of the first bedroom to the only possible place, which is the wall behind the bed. For possible feeling of anxiety from "builded around" the head while sleeping we skipped the parts around the bed, which serve as a bedside tables. Bedroom contains also worktable with a view of the loggia.

See also other all Bedrooms 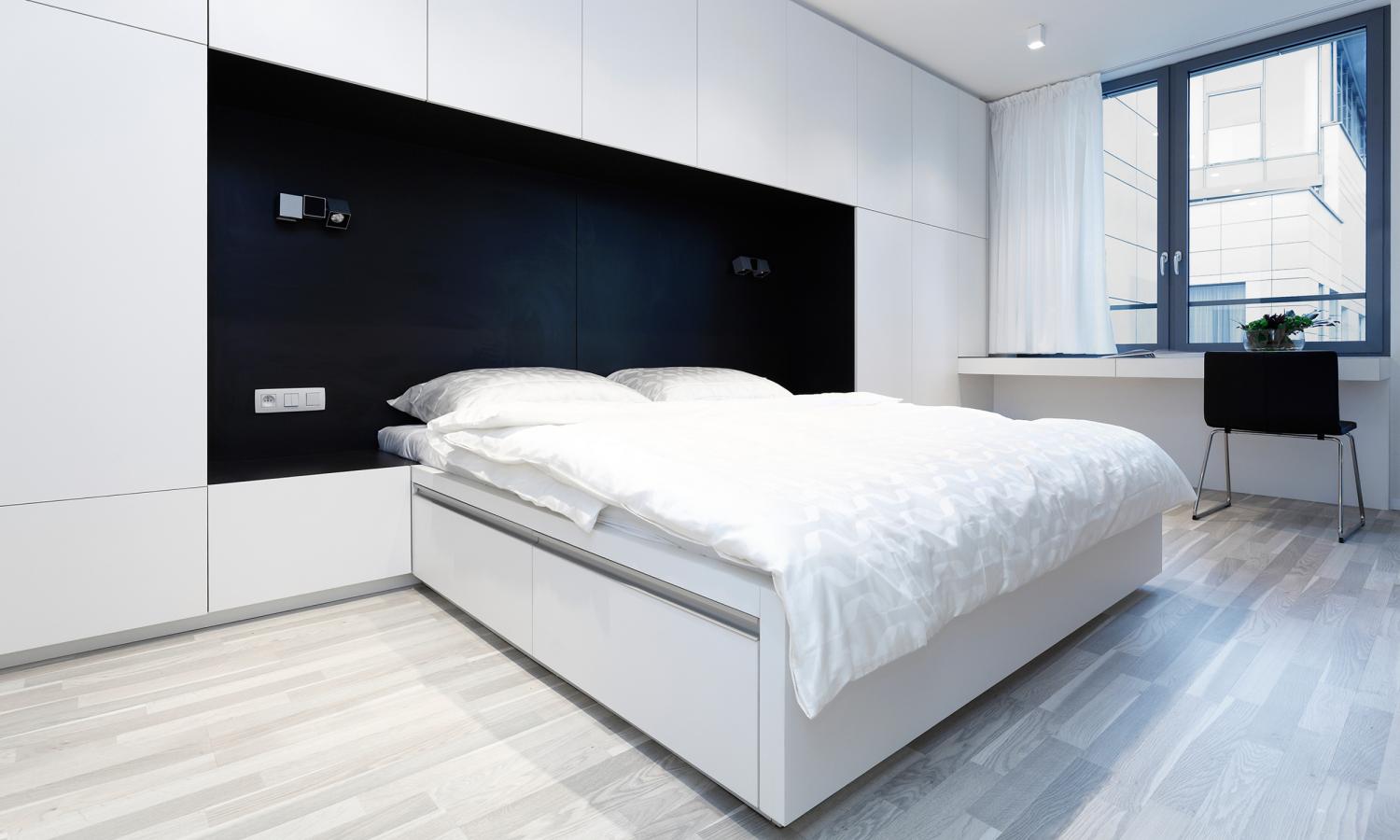 See also other all Bedrooms

Work area in the first bedroom

Each bedroom contains a work area, which consists of a table with extendable drawers and storage space for documents. The chair is the same as in the daily part so you can use it also for a dining table. Work area was designed and made-to-measure so it acts as a natural part of a bedroom and will not interfere restful sleep of tenants. 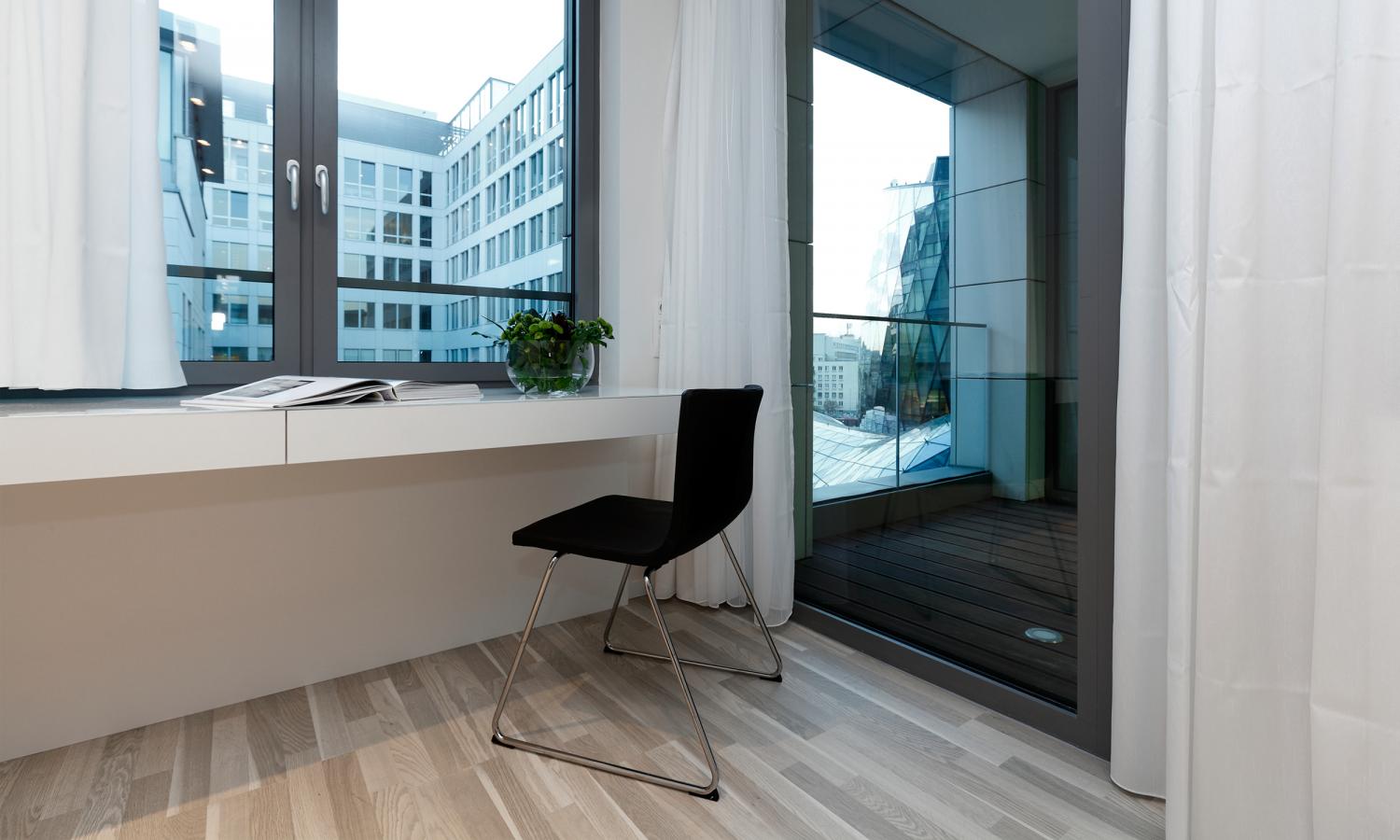 Storage space in the first bedroom

Storage space in the bedroom are designed so as to not occupy more space than necessary. At the bottom parts of furniture including bed, we have proposed pull-outs which we consider as more comfortable in term of access. Pull-out drawer above the desk is an atypical solution because is accessible from the side, not from above.

First bathroom of the apartment

Since the apartment is designed to rent, bathrooms are completely tilled, so they can be easily maintain. Black and white bathroom dizajn is universal and so easy to furnished using colorful accessories according to taste of its inhabitants. Mirror cabinets are designed and made-to-measure, door dividing is based on the deployment of the joint veneer. 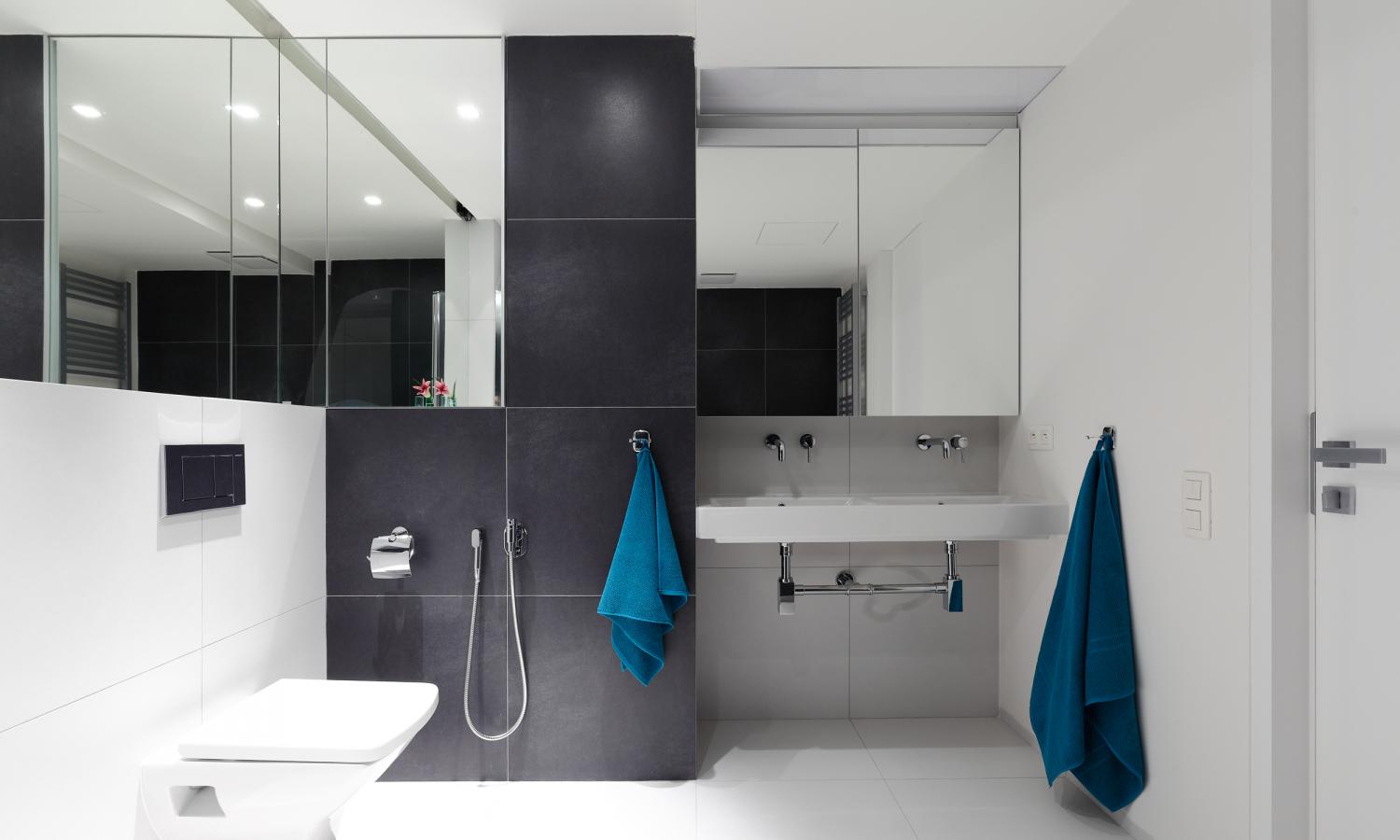 In the bathroom we used large tiles that stand out at proper designed installation plan. That means, that cleft between tge tiles are transferred from the floor on the walls and in better case visually separate divided walls and floor to the same area without small cuttings on the sides. In this bathroom is even mirror cabinet doors divided by tile joints. 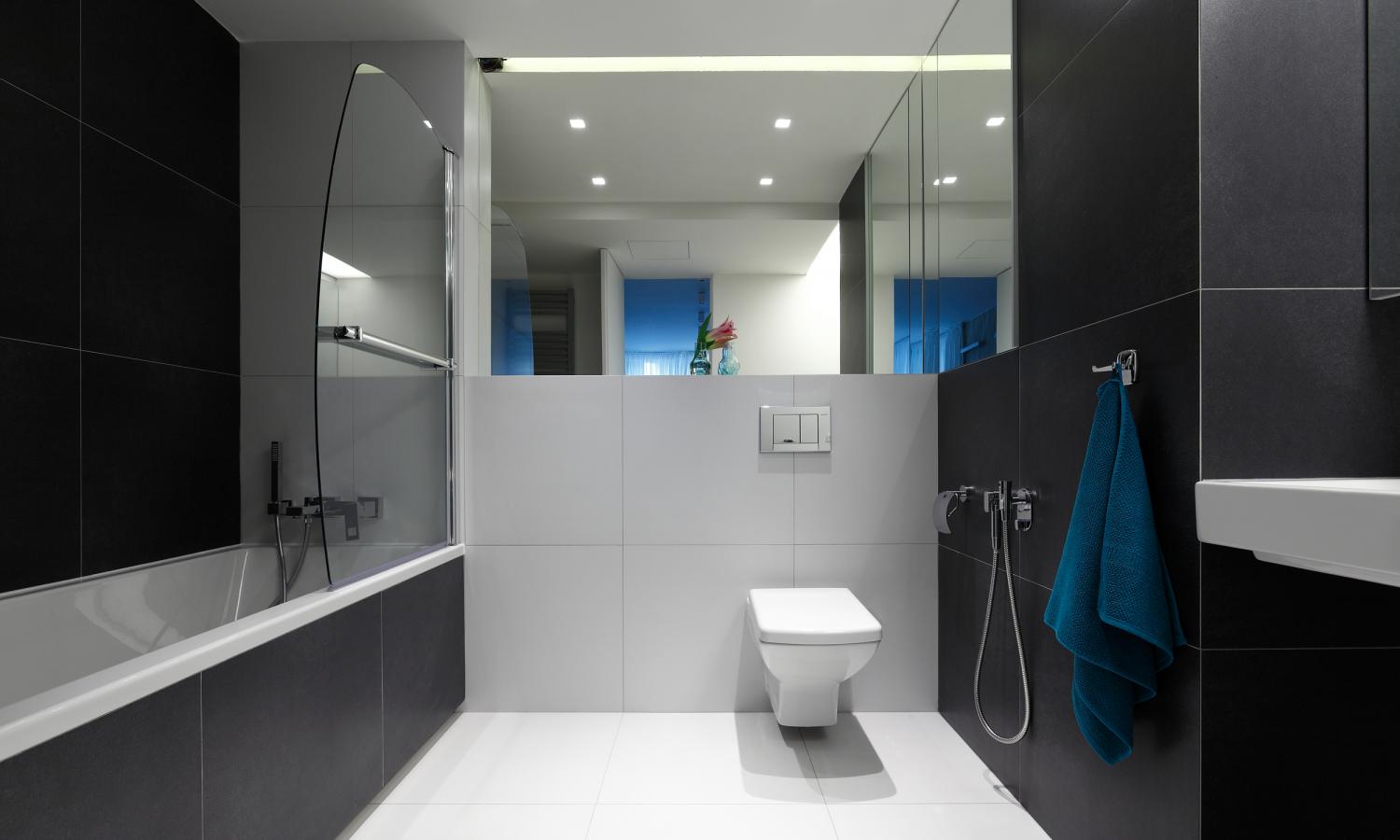 Second bathroom of the apartment

The second bathroom includes a double basin, toilet with bidet spray and brick flush at the same level like is a room floor. Monochrome design of wall tiles and floor tiles makes from the bathroom neutral and universal space, which can be customized according to the taste of tenants. Clear proposed clear design so the purity is easy to maintain. 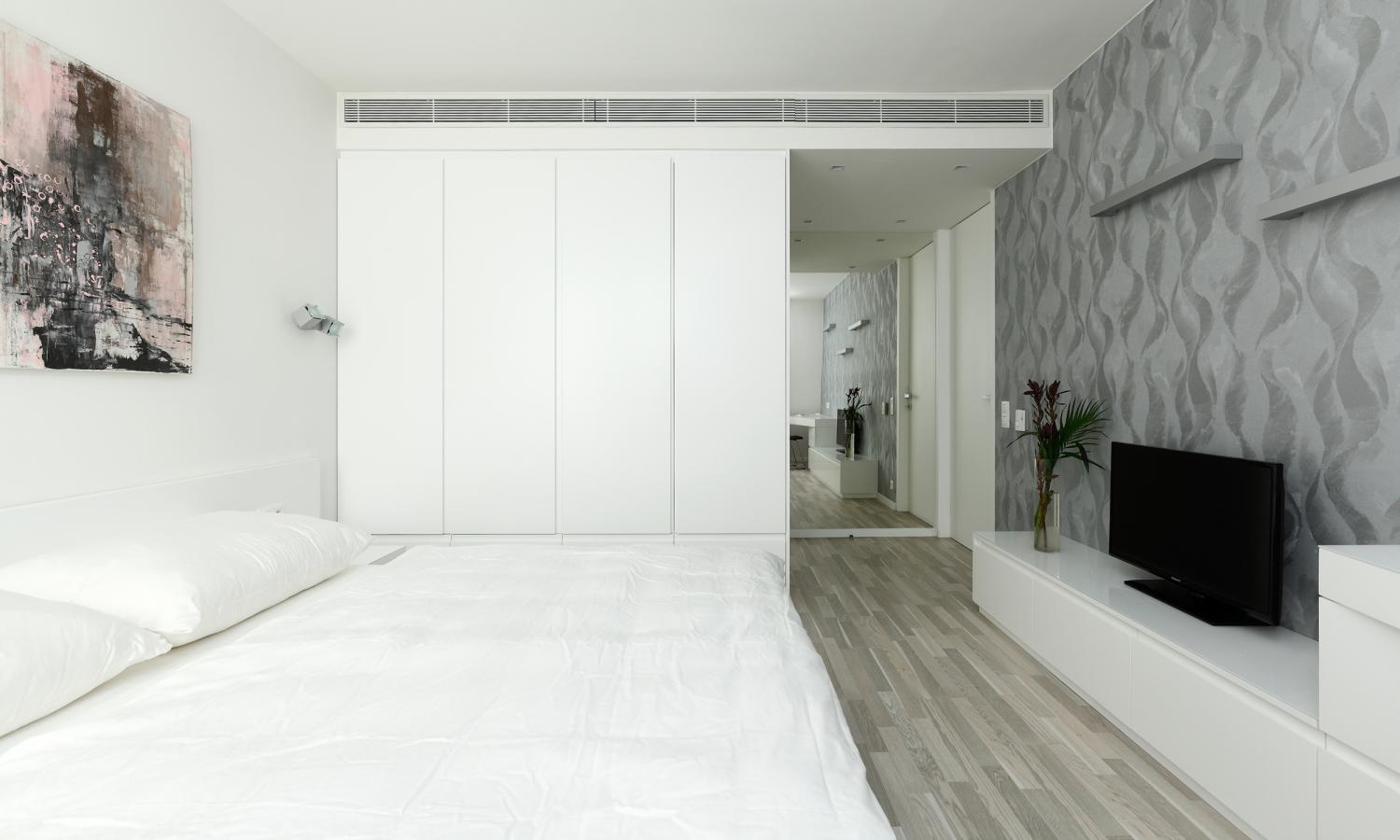 Work area in the second bedroom

We desgined and built work area in the second bedroom as made-to-measure from the same materials as the rest of the furniture, therefor it acts naturally and does not interfer silent and quiet atmosphere of bedrooms. Table creates one unit with the cabinet under the TV. Wall behind the TV originally supossed to be tiled like bathrooms, but investor finally decided to replace the tiles with wallpaper. 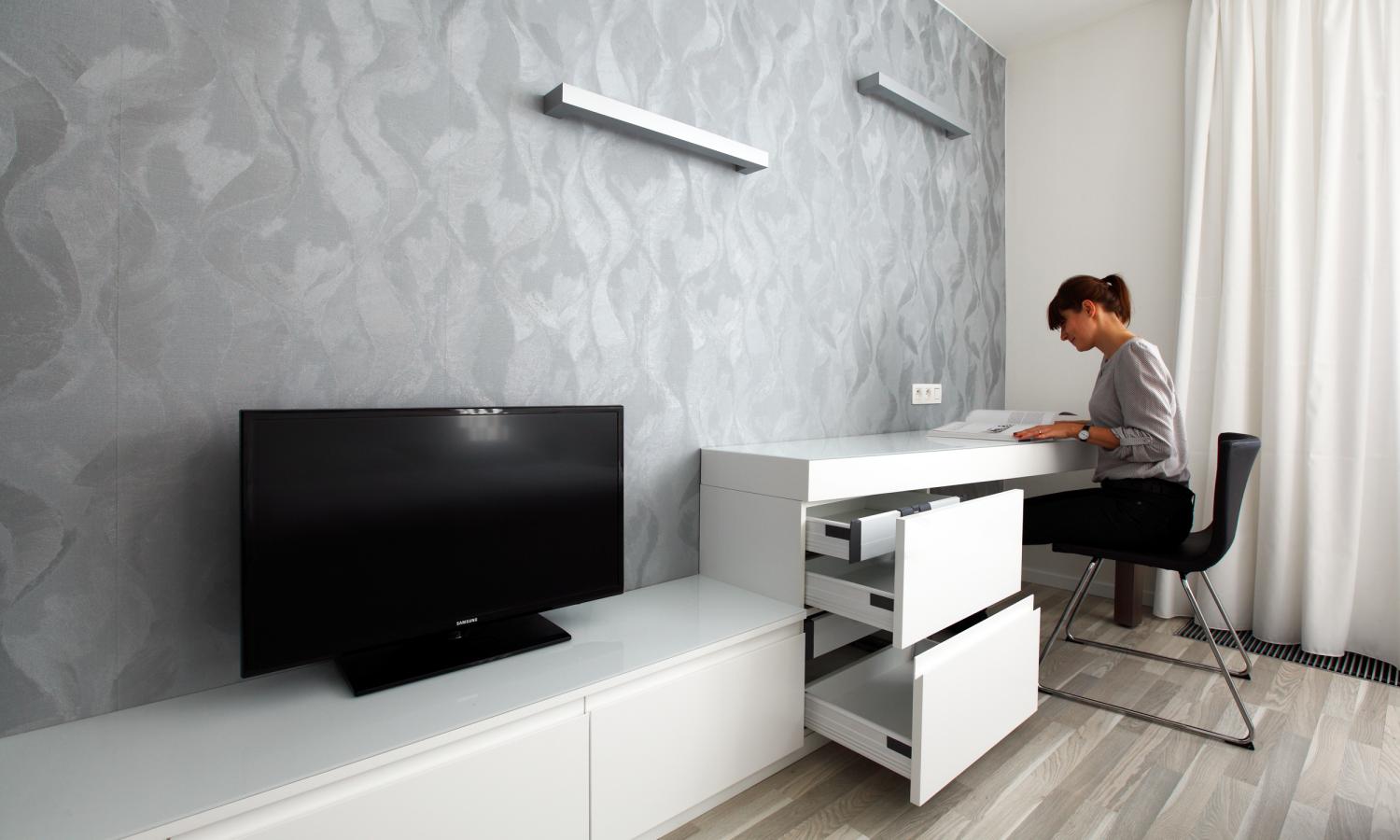 Storage space in the second bedroom

Beds in both bedrooms have their own storage space for duvets in pull-out containers under them. This method of storage allows its access without disturbing the horizontal position of the bed. It eliminates dropping of bed sheets like in the case of using tilting systems. Wardrobe has at its bottom part pull-outs for convenient access to your content. 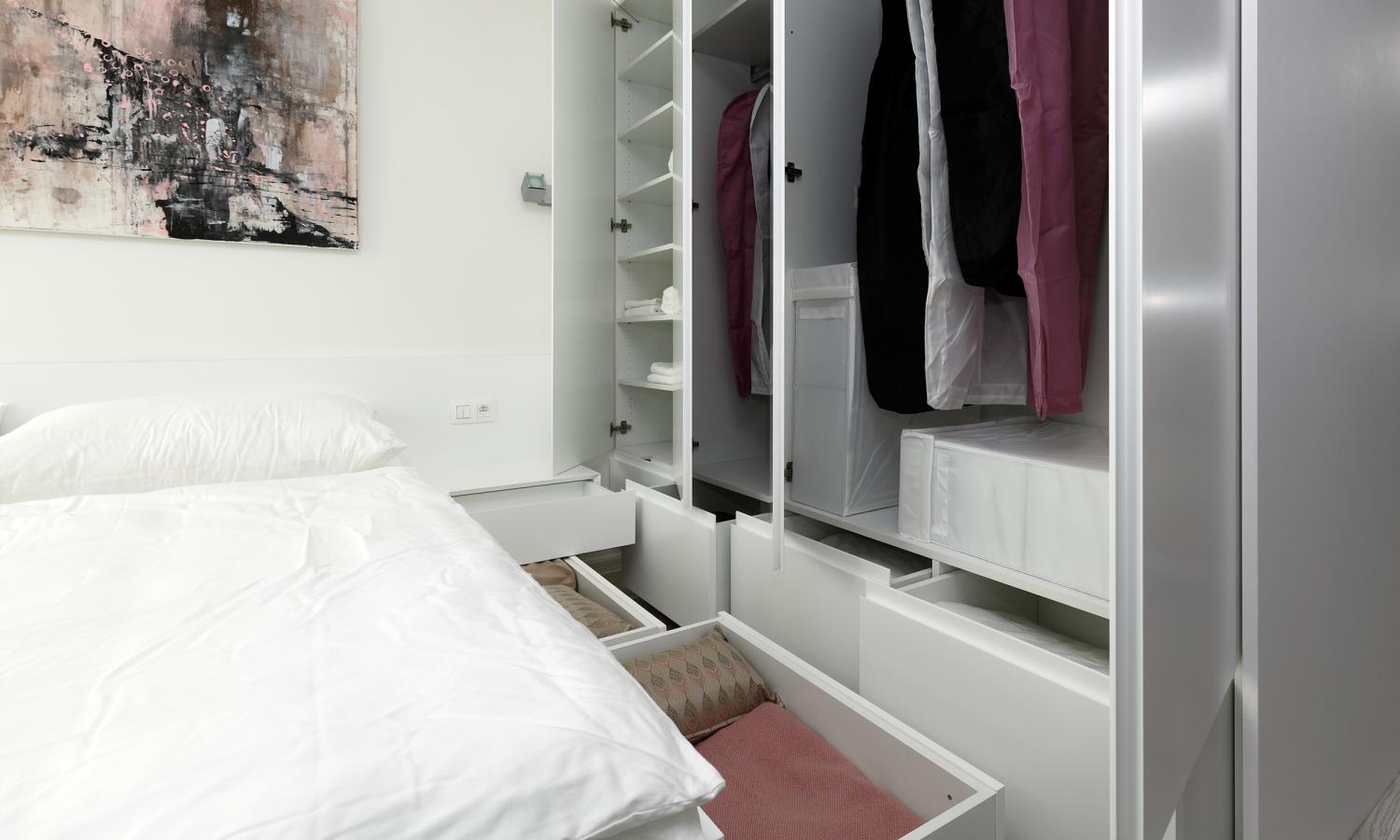 Second bathroom of the apartment

The second bathroom includes a double basin, toilet with bidet spray and brick flush at the same level like is a room floor. Monochrome design of wall tiles and floor tiles makes from the bathroom neutral and universal space, which can be customized according to the taste of tenants. Clear proposed clear design so the purity is easy to maintain.

Second bathroom contains in addition to the toilet also double basin, shower enclosure and washing machine and dryer, which were originally planed in the central shared space. Based on client's choice we put them in the second bathroom. Appliances were designed into the niche so that are visible only front panels. Bathroom so remained elegant and clean. 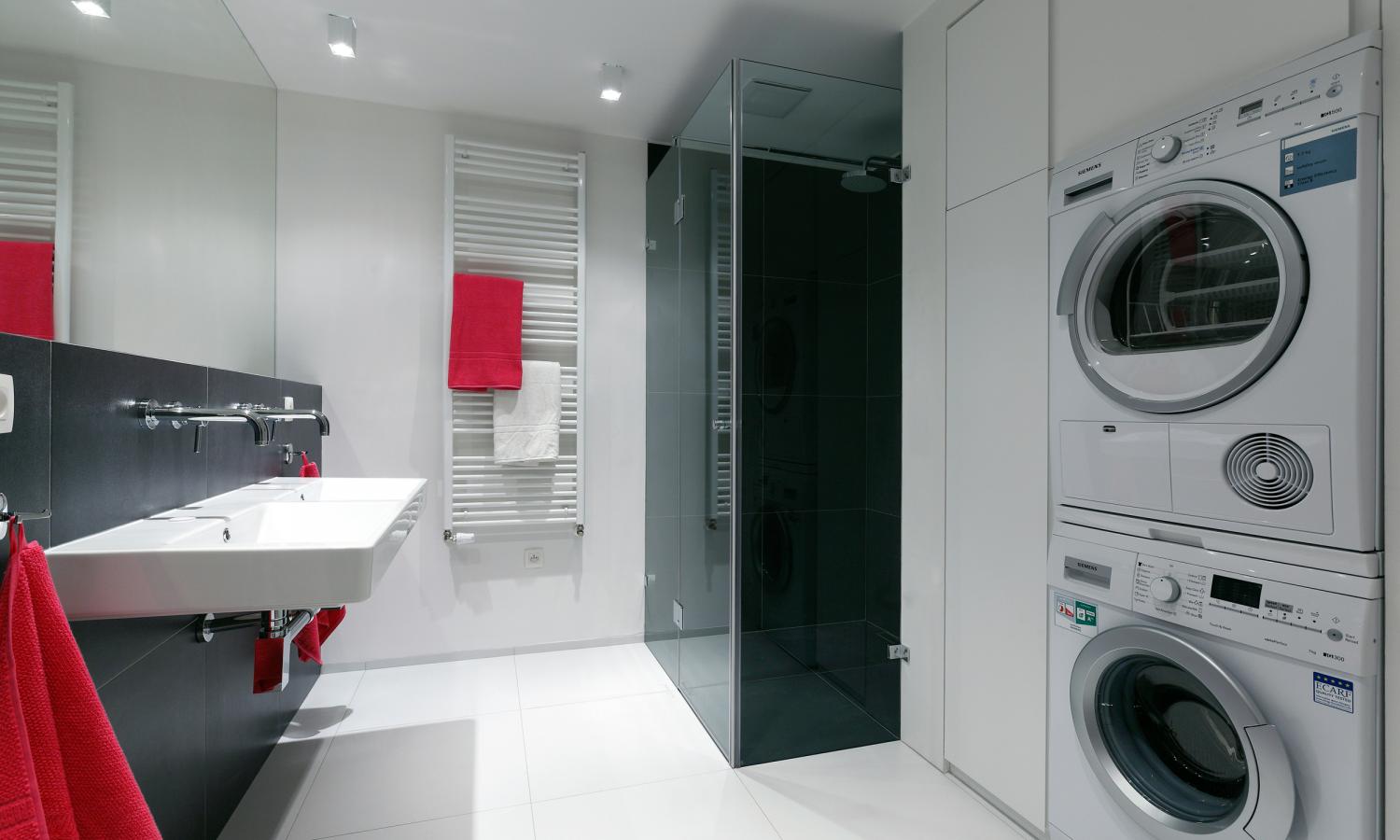 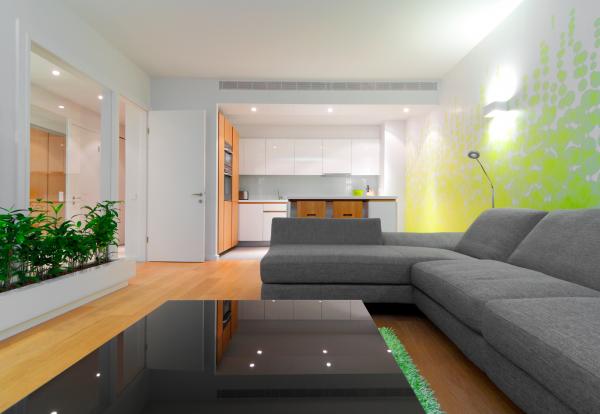 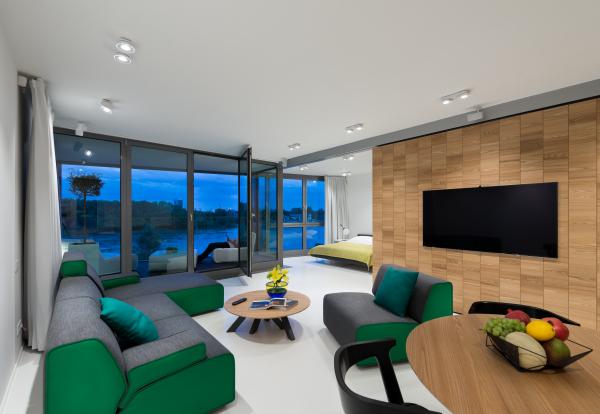 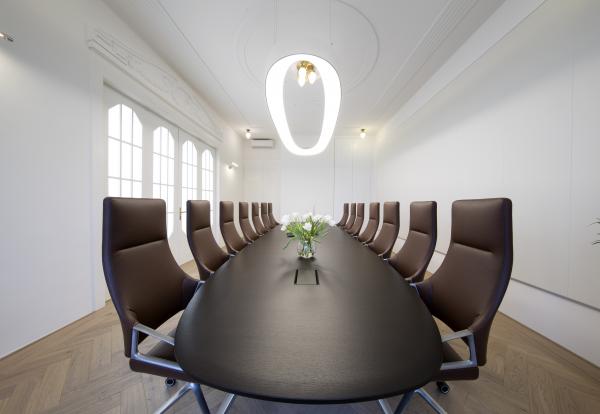 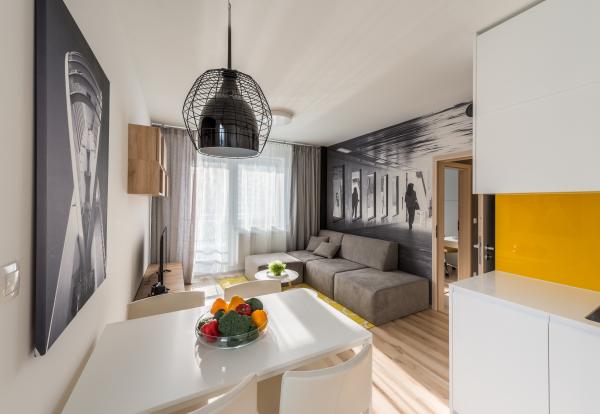 Our executions are same as the visualizations. 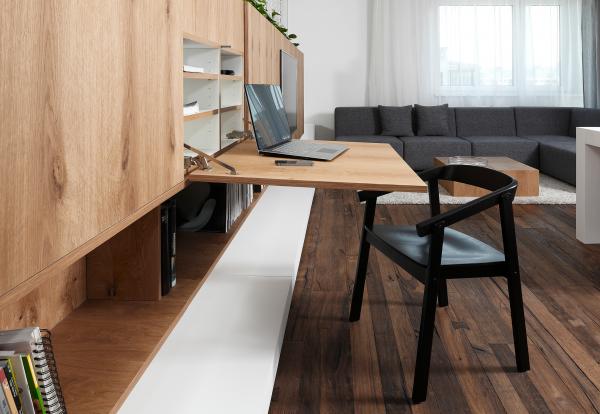