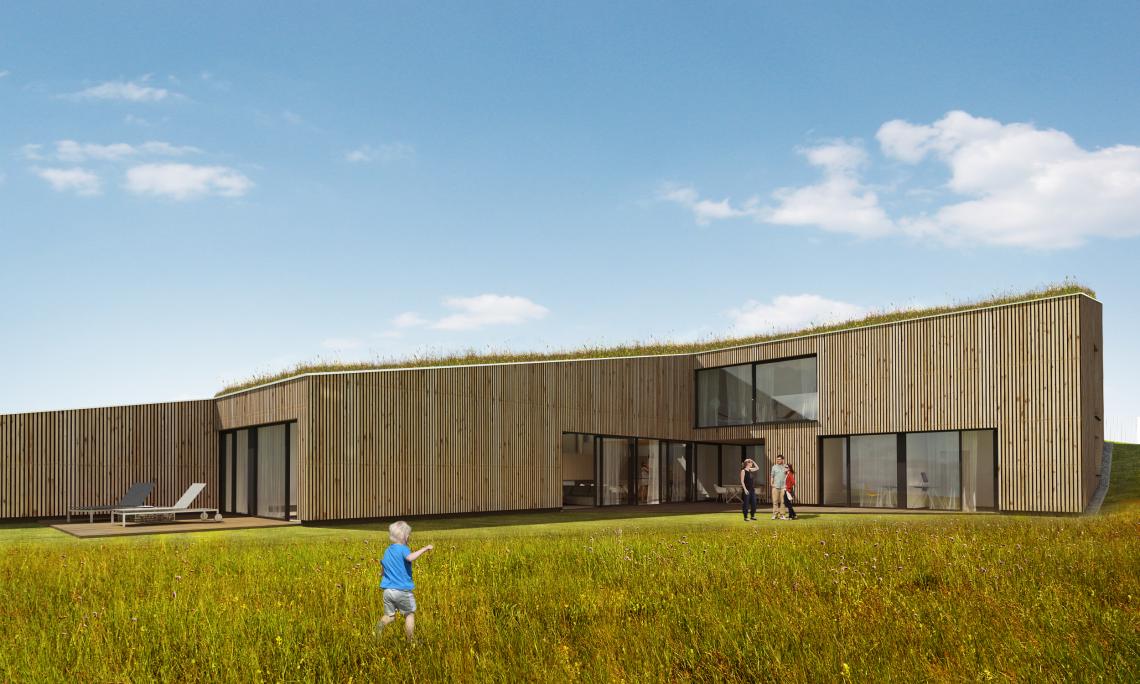 The architecture of the family house corresponds with the hillside creating by its mass an atrium protecting a garden and a terrace from optical contact from the street as well as from the neighbour. Compact and simple shape of the house looks natural, as if it belonged there.

The architecture of the family house corresponds with the hillside creating by its mass an atrium protecting a garden and a terrace from optical contact from the street as well as from the neighbour. Compact and simple shape of the house looks natural, as if it belonged there. In spite of its atypical appearance the house has a logical and practical interior focused on the owner´s needs.

Design (visualization) of an atrium with a roofed terrace

The orientation of the atrium and inner facades has been adapted to the inclined plot thus avoiding violent and radical changes of the terrain well. Functional arrangement of the windows creates interesting compositions on the facades. As the daytime zone has windows on both sides during sunny days it will be suffused with sunlight all day long. 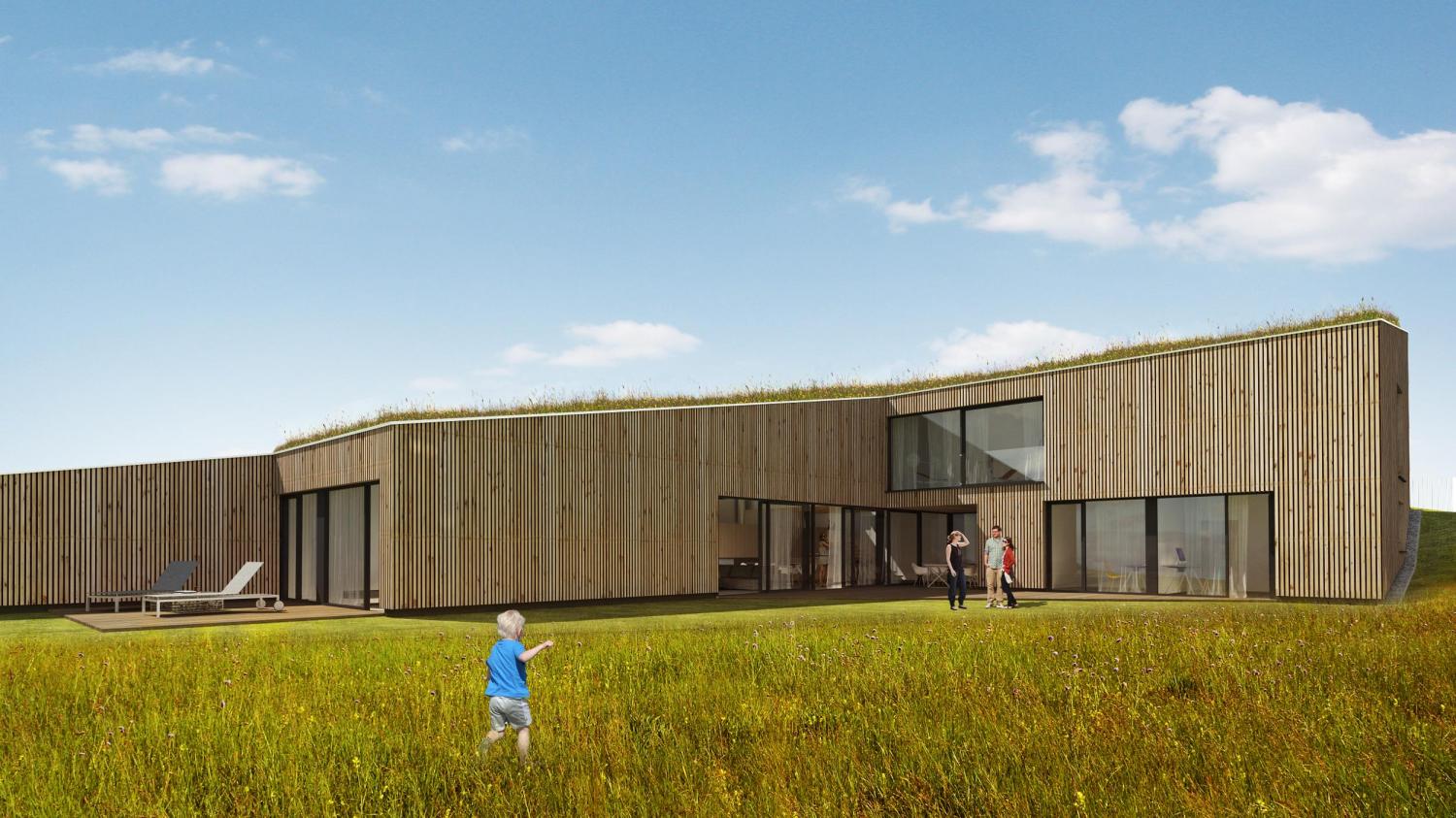 Design (visualization) of a side view

The upper edge of the house descending alongside the slope – but in smaller angle – gives the south-eastern facade a unique look. The extraordinary shape of the house contains functional ground plans with practical layout solutions. The big windows brighten the entrance, the study room and the daytime zone. The green roof and wooden facade accentuate a natural character of the house.

From the street the house looks discreet and introvert which is exactly what we wanted. Embedding of main functional zones into the lower level lowers the house visually when looking from the street. On the upper level there are entrance halls, storerooms, garage for two cars, fitness and study rooms, making an impression of a single-storey bungalow.

Design (visualization) of a yard facade

Atrium facing rooms look into a "valley", so we furnished them with big windows. Upstairs there is a fitness room, downstairs there is the living room connected with the kitchen and the dining room, the children´s room, parents’ bedroom and accessories. The parents’ zone is in the outer part of the house with the independent terrace allowing enough privacy.

Design (visualization) of the look from below

The perimeter wall parallel with the longer boundary of the building lot converts smoothly into a wall creating a characteristic sign of the house: a triangle shaped facade, protecting the garden from neighbours´ gaze. The walls were designed of maintenance-free spruce wood without surface finish. With the wood turning grey, the house will even better merge into the nature around.

Design (visualization) of the atrium view

When looking from both sides the triangle silhouette of the house is visible. By inclining the roof we achieved both natural lowering of the house in accordance with the terrain and natural slope of the green roof. In spite of the daytime zone being almost two floor high, the overall impression of the building is decent and gentle and it is immediately evident that the house belongs there.

Design (visualization) of the north-western facade

When looking from the upper part of the street simple and compact shape of the house shows interesting composition of masses making the architecture more varied that it really is. Inclined receding structures descend with the terrain until the structure and the terrain merge into one. In the facade looking at the neighbour there are garage and guestroom windows.

In the wing parallel with the longer border of the building lot the daytime zone has been situated. Thanks to its inclined roof the height of the zone is changing with the highest point of 4,5 metre. The double-faced windows provide the daytime zone with sufficient light. Above the kitchen there is a study room that can be separated only by a balustrade. 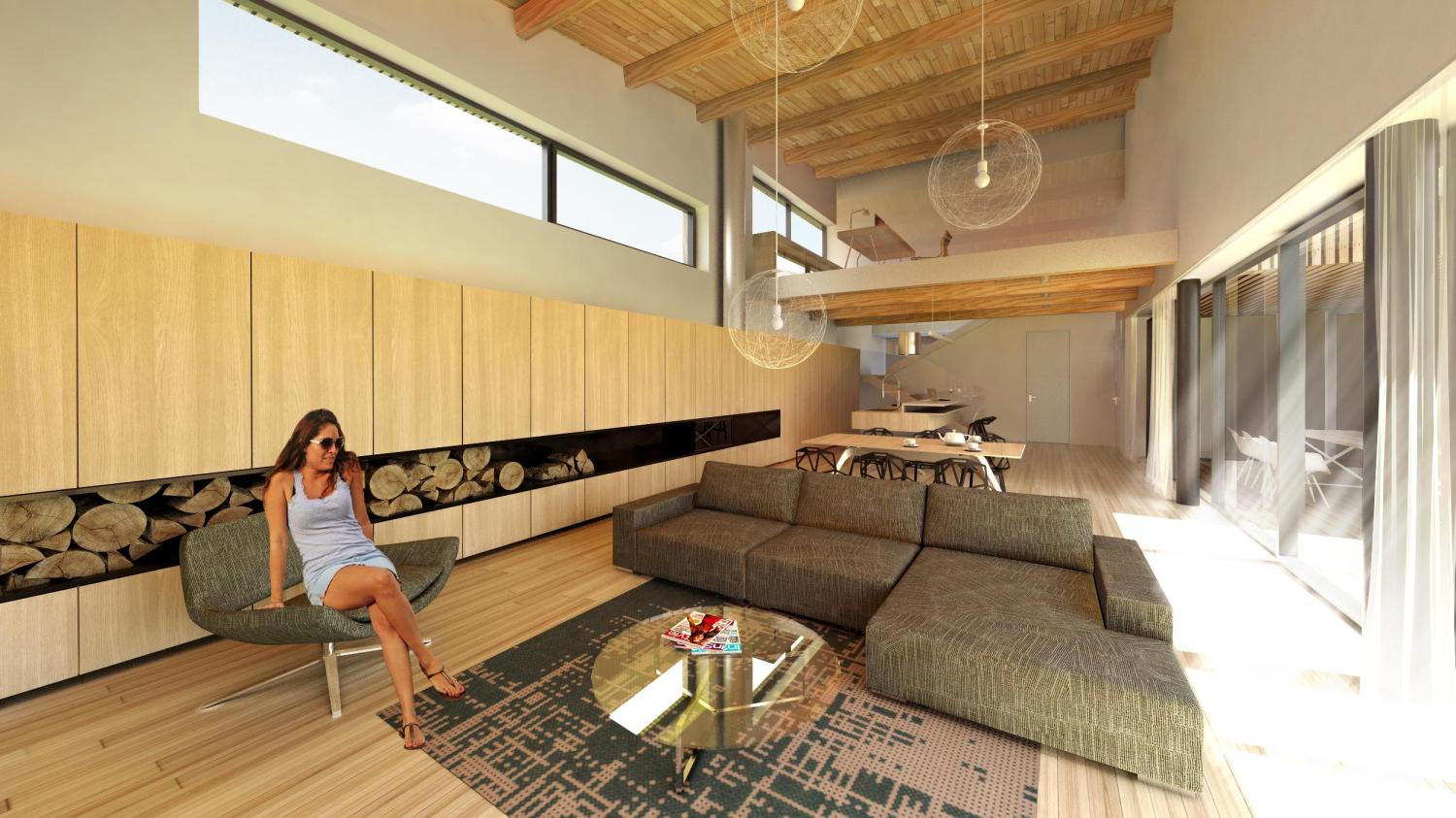 Design (visualization) of a view from the kitchen

The kitchen in the central space offers good overview of any actions in the house. From the kitchen there is a view of the terrace, the garden and, naturally, the daytime zone and thanks to a all-glass facade also of the night time zone. Thanks to a big modular sliding door one half of the facade can be opened into the terrace. 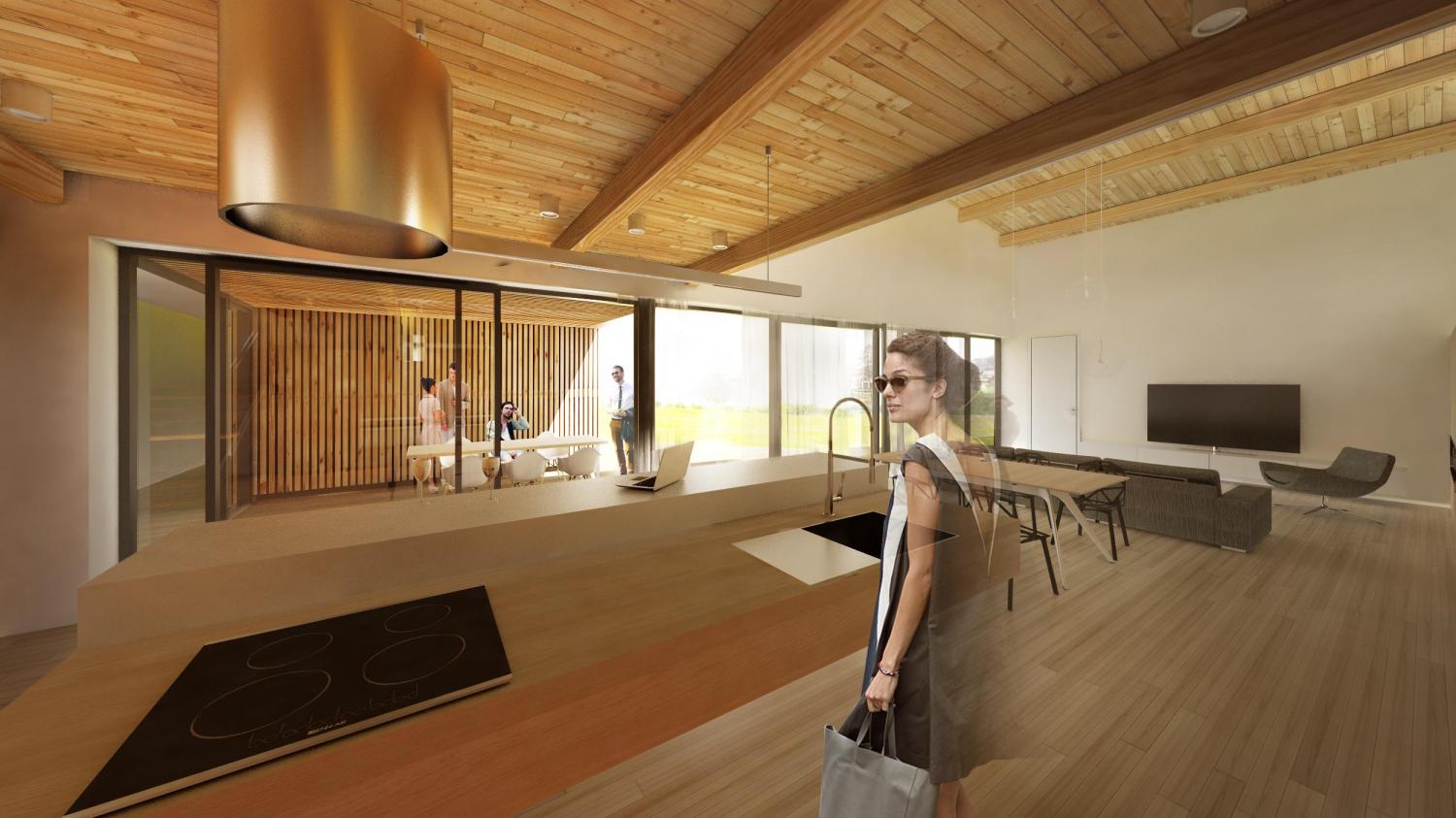