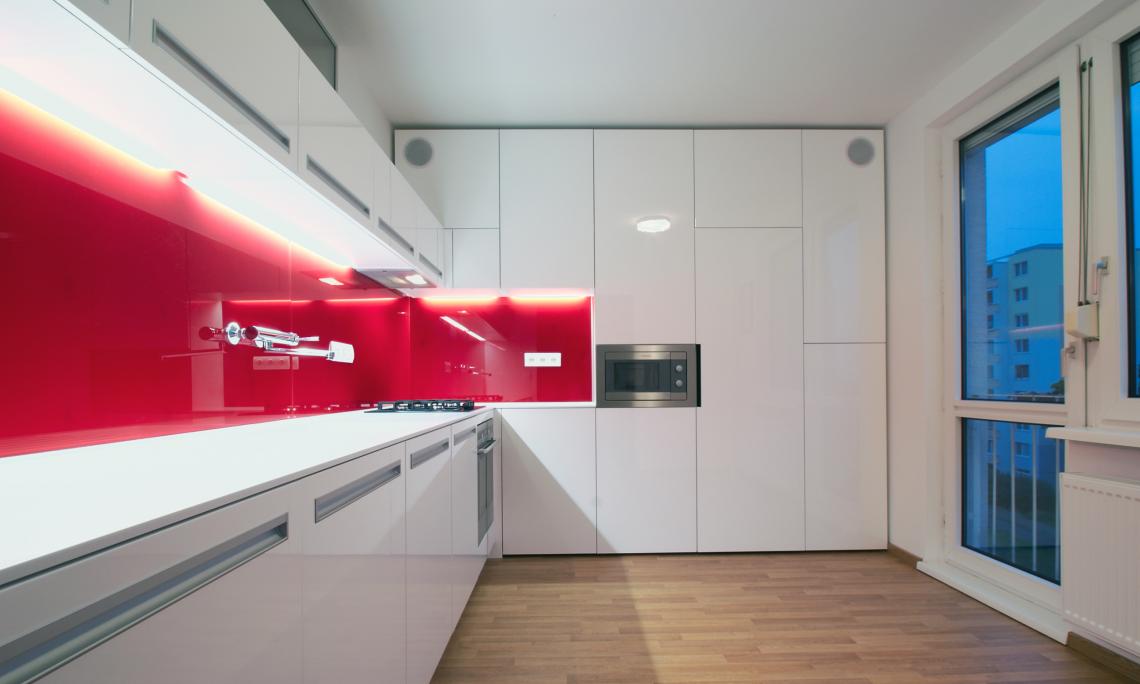 For someone reconstruction means replacement of an old furniture and repainting the walls. For us reconstruction changes quality and add a value. In this project we brought needed daylight into the dark rooms inside of panel house.

Since this was a reconstruction of in the past already reconstructed apartment service core, we had to remove not formica but brick walls. Within the reconstruction we renewed bathroom, toilet and kitchen. Work lasted three months.

The original kitchen was old and so we had to remove it all. Together with the kitchen we destroyed also floors, wooden doors, plumbing and flooring with tiles. Interesting was digestor in the original kitchen, which was designed as a recitculating, but without a filter. We transfered the red color of the original tiles into the new design. 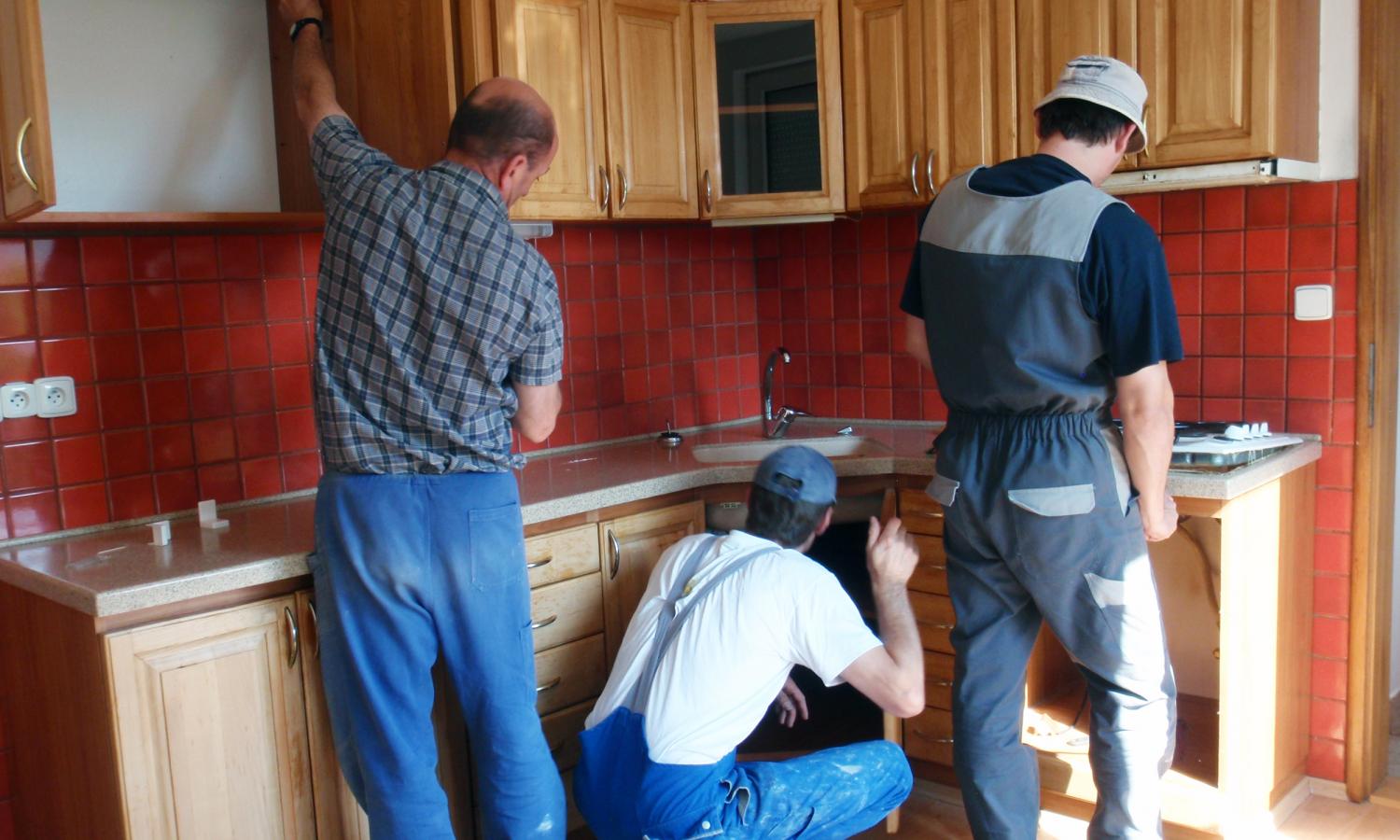 The original kitchen was worn down but still looked functional. Only later we found out that did not work either, after flooring tiles removal and demolition of old partition walls, we encountered a technical beads, as fans in bathrooms and toilets, that did not go into the vent pipe but into the bricked space of service core. 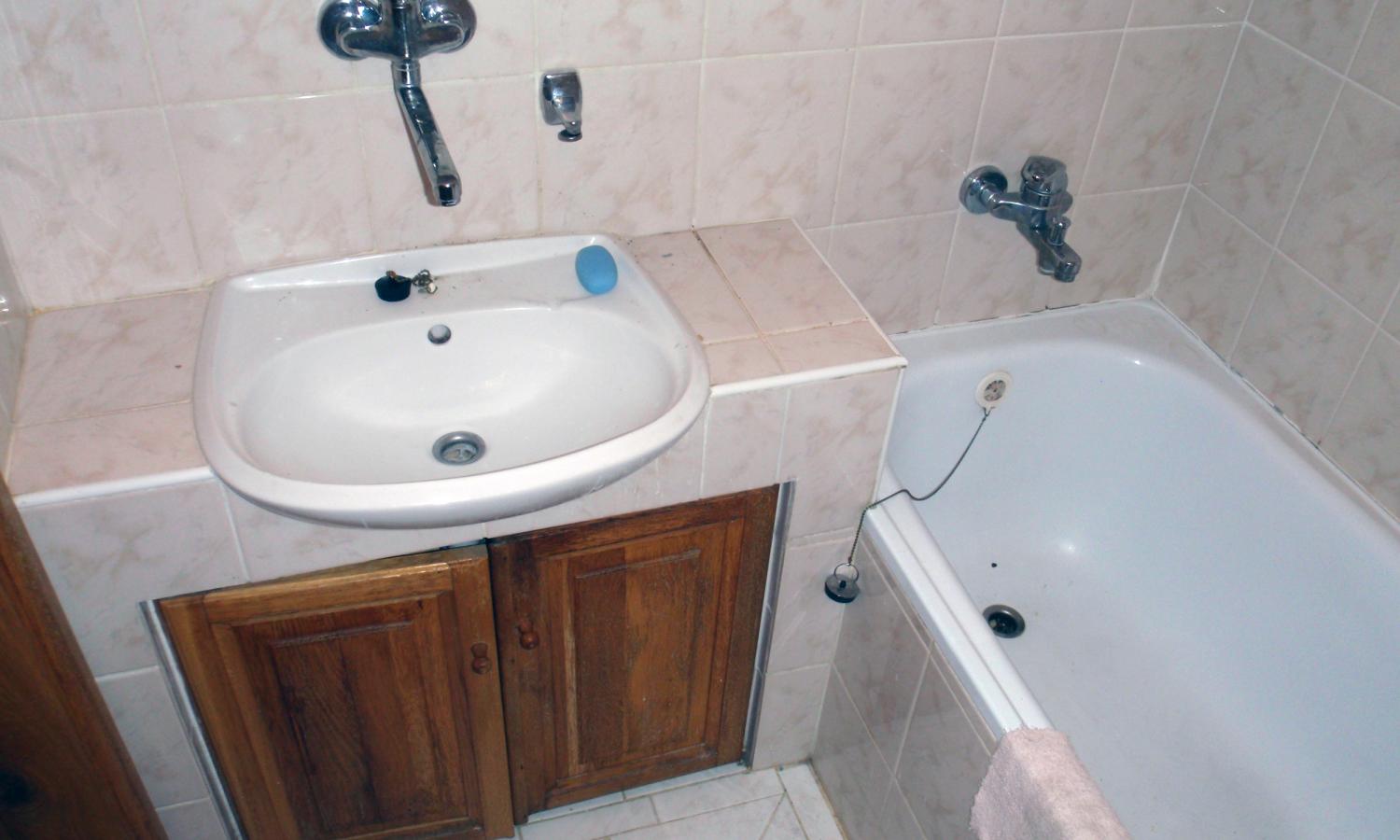 The original foyer looked moody despite adequate area, because it was missing daylight. The same situation was in the bathroom and WC but with that reference that they had a lack of space. Floor plan dimensions we espanded of the area of corridor, at the top of proposed skylights, which solved the supply of daylight. 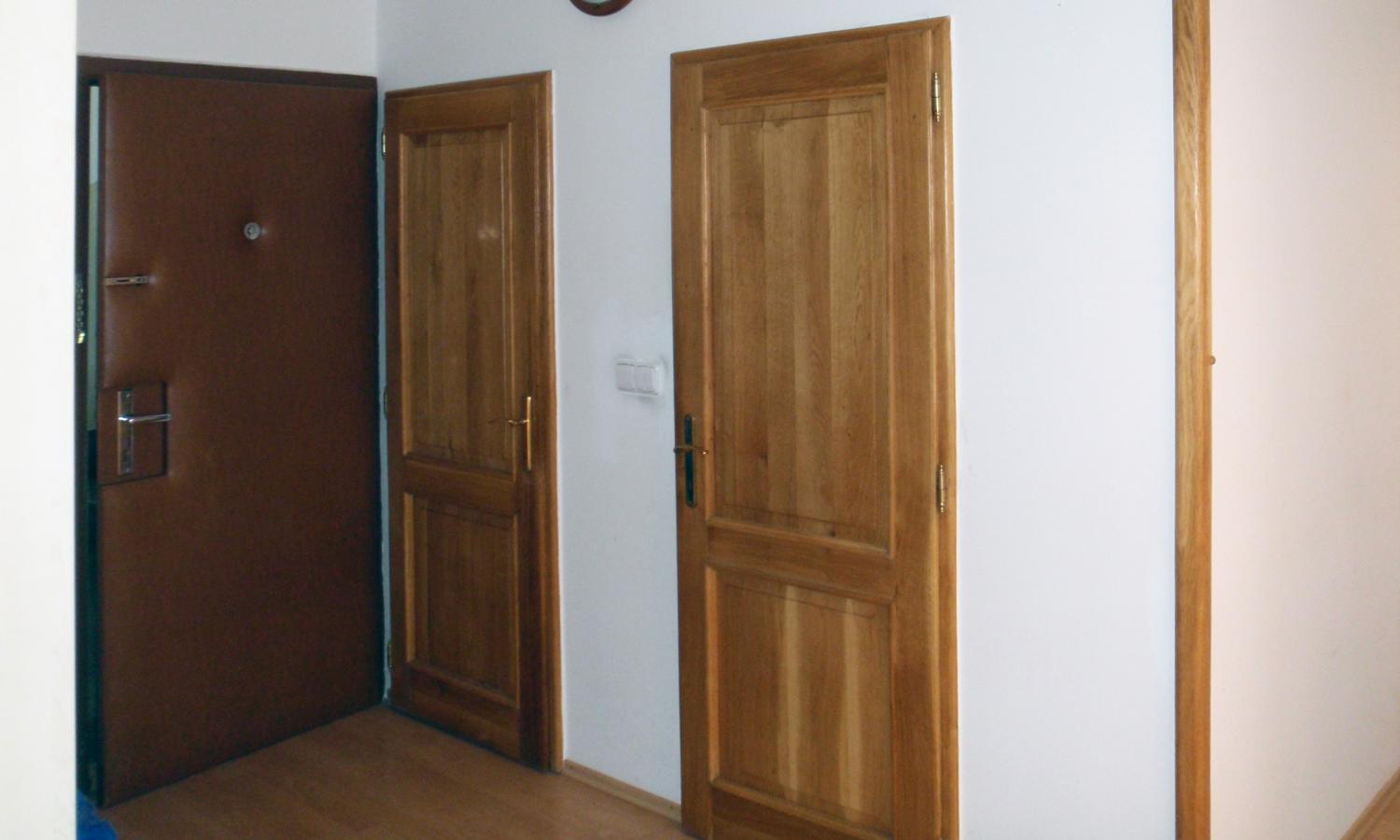 Intervations to support structures need a static technical expertise, which we can provide as a part of the project. For cut-out openings into the concrete panel special equipment is needed. First the hole is cut using water-cooled diamond cutter blade, flowing water must be constantly sucked with vacuum. 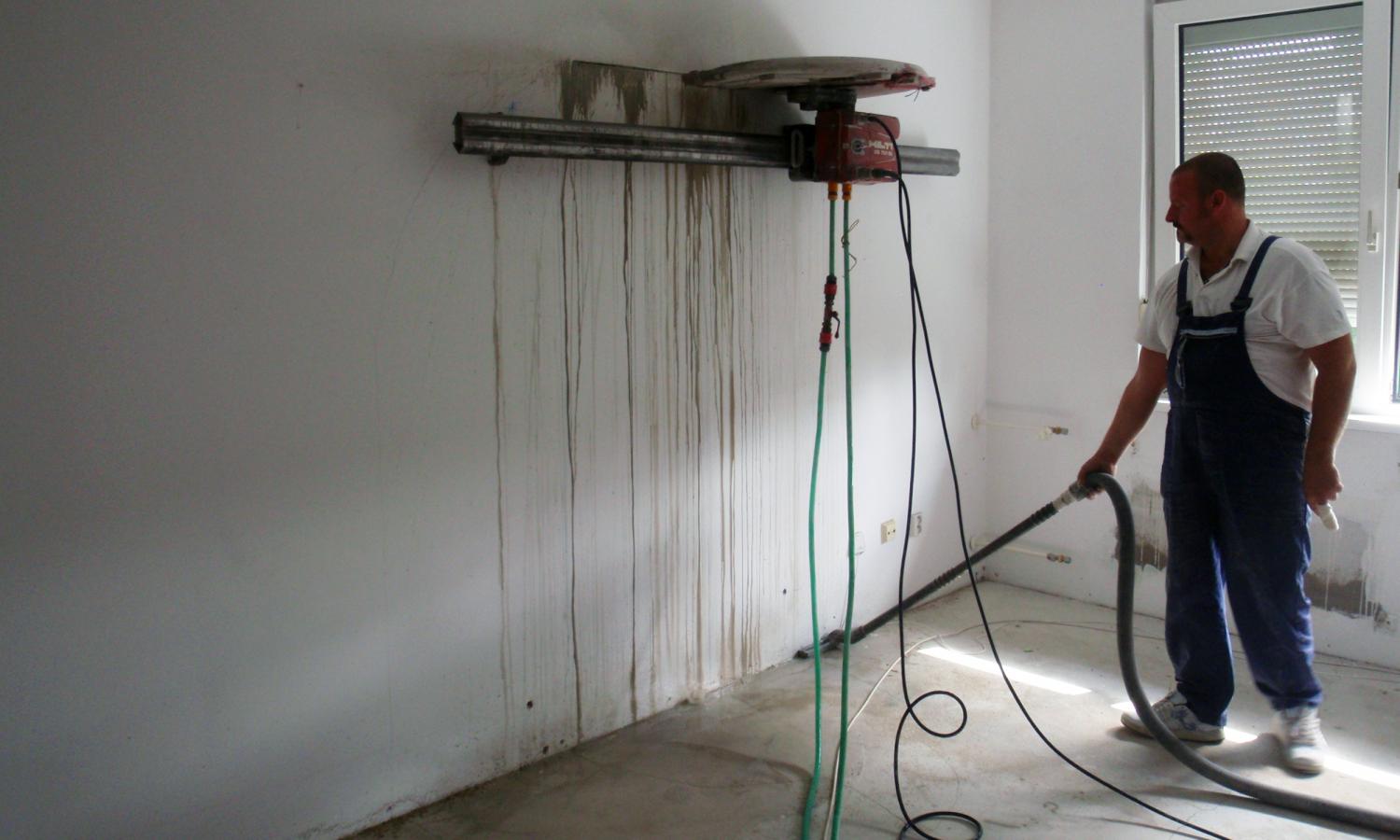 Cut-out piece of a concrete is falled on a already prepared pneumatic poles, where is chopped with jackhammer into the smaller pieces that can be filled into the bags and carried to a landfill. Cutting into the concrete is made by a company with which we cooperate for a long time. Cutt-out of a door opening into the 150mm wide reinforced concere wall last about 4-5 hours. 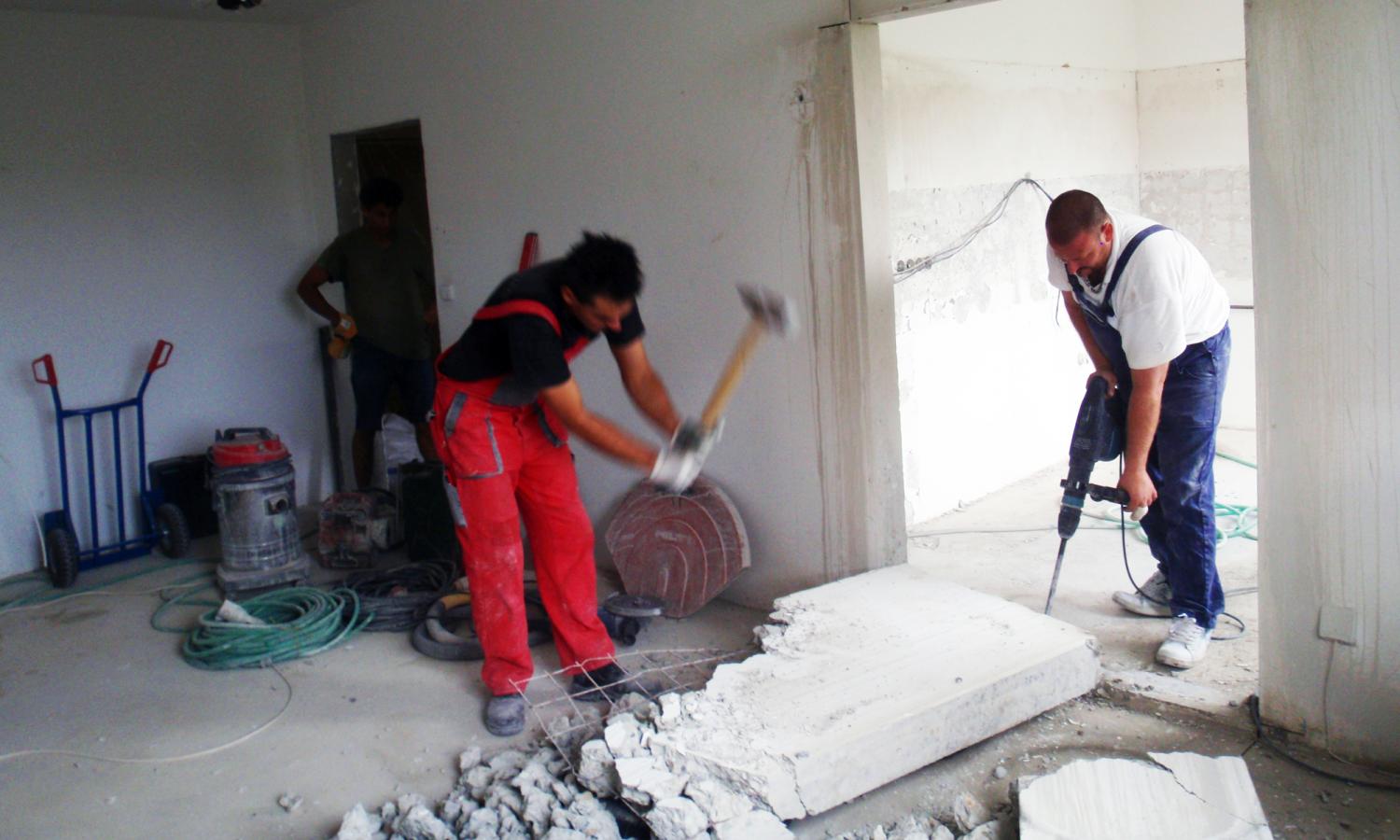 Wall partitions between the corridor, bathroom and toilet we removed and bricked up again. Walls from the height of two meters, we cut off and solidified with concerete rim. In a new design instead of brick filler we used fixed glazing. We achieved illumination with daylight in the bathroom, WC and also foyer. 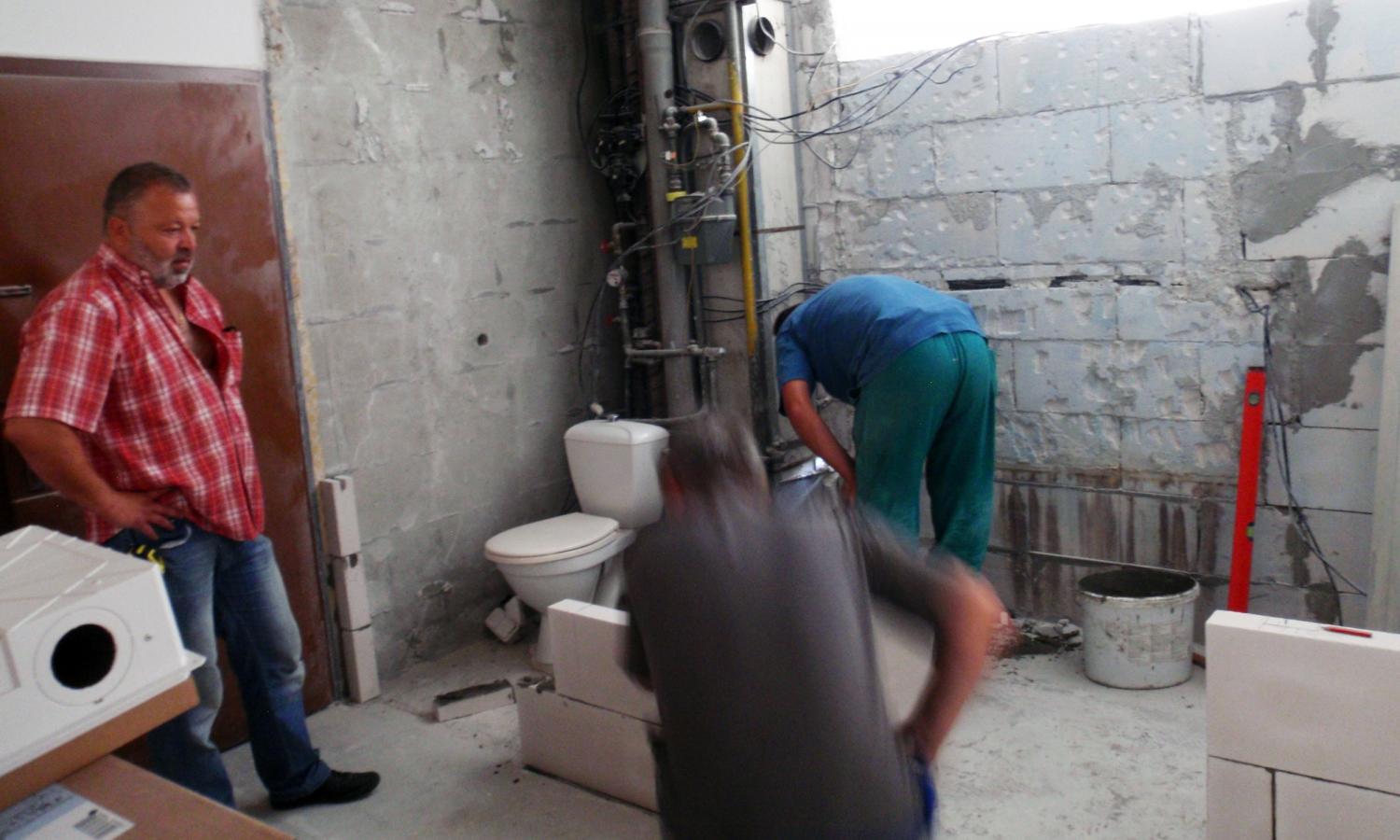 As a part of reconstrucion we replaced electrical switchboard, we made a new electrical wiring in kitchen and sanitary areas. Even when we have done before, in the living room, that is connected to the kitchen, we also added several sockets so the owners do not have to a lot of cables and extension cords on the floor. 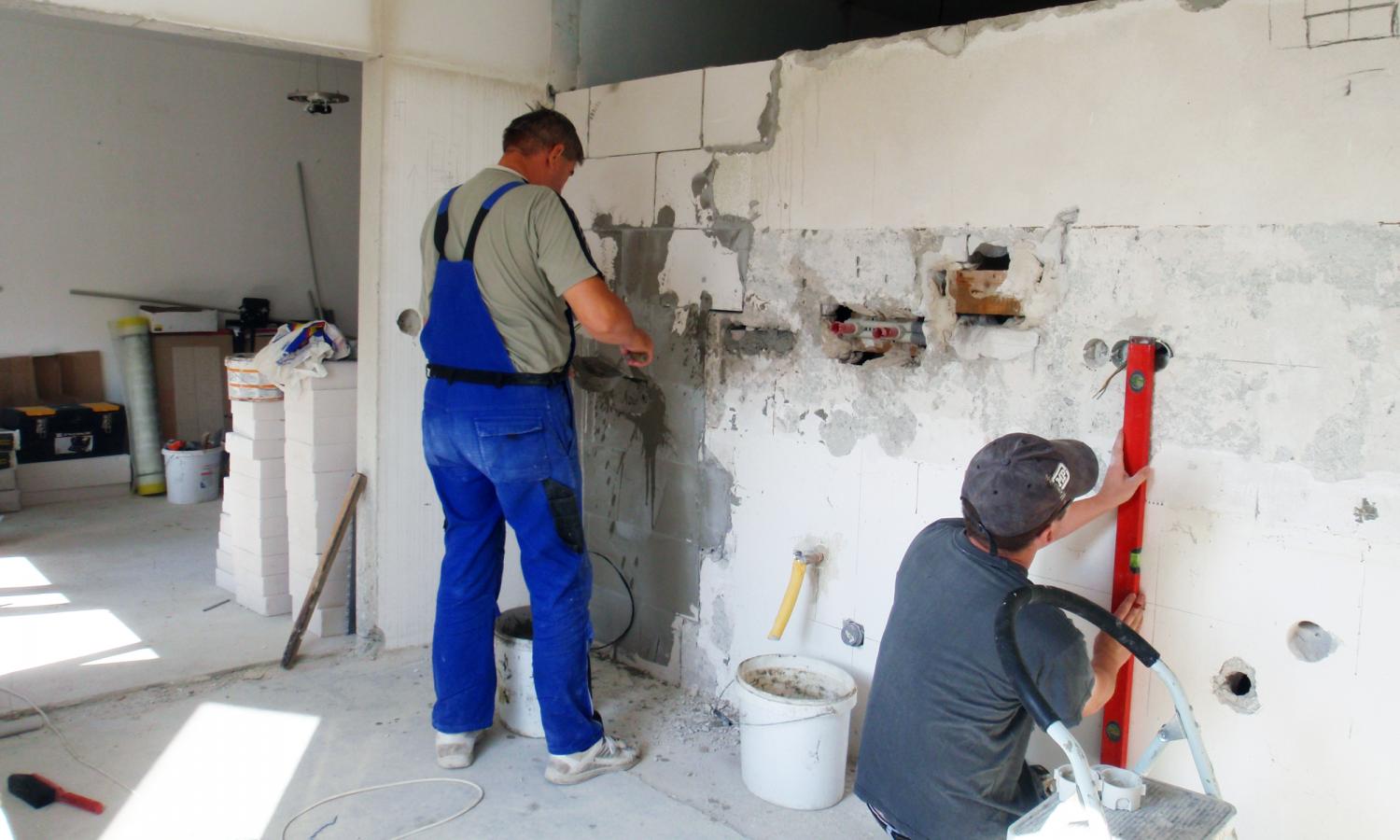 Surface preparation of walls and floors

In the older panel houses is almost a rule inequality and irregularity of the original construction elements. Oprical roughness can be eased with using furniture made-to-measure and precise measuring of a room before realization - we did it so in this apartment too. More difficult situation was with flooring, in opposite corners of the room were measured several centimeters differences in heights. 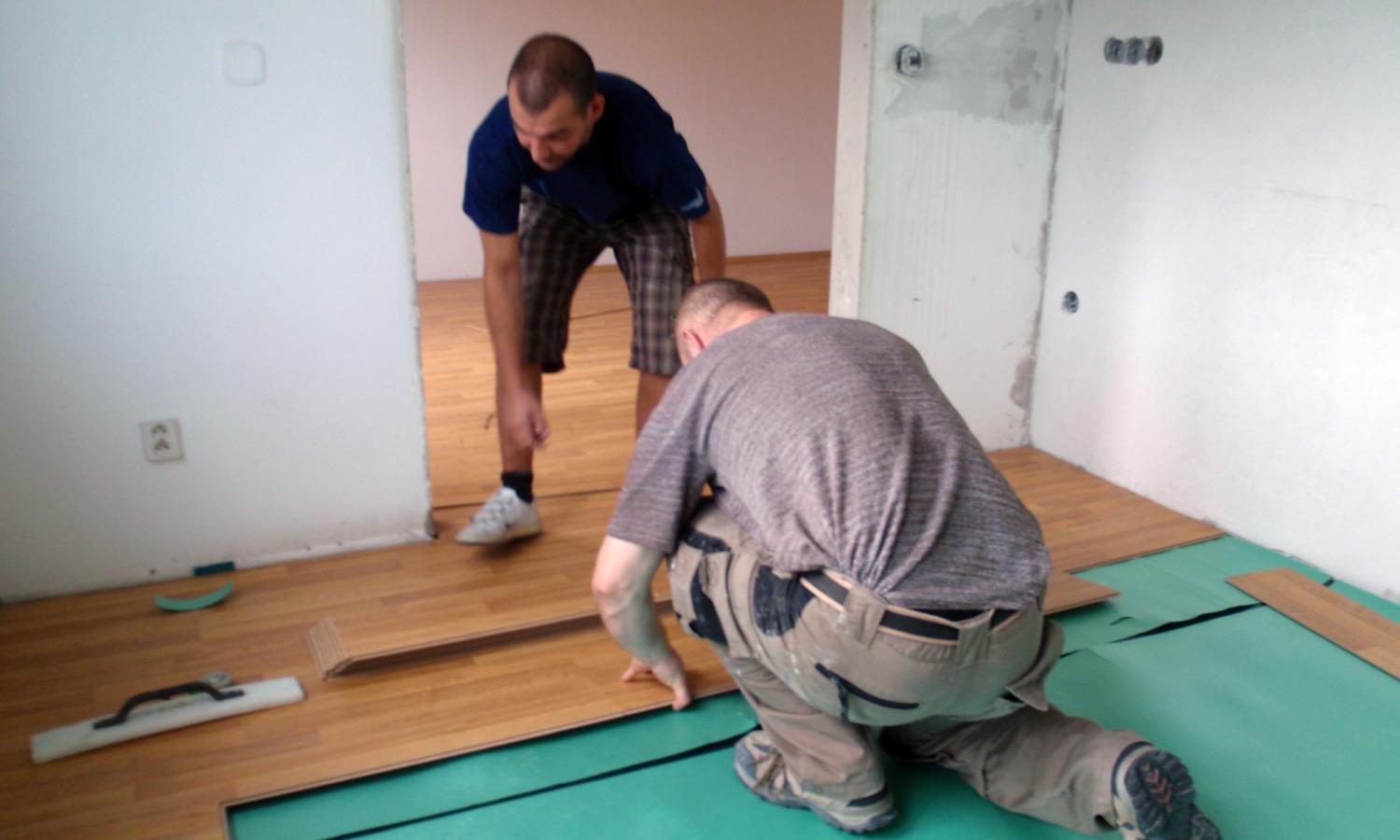 We designed bathroom shower enclosure with lower height than usuall, because otherwise it would interfere with the skylight area. Shower wall was made-to-measure together with atypical brace element, which we have proposed into the height so it was possible to place shower curtain on it. 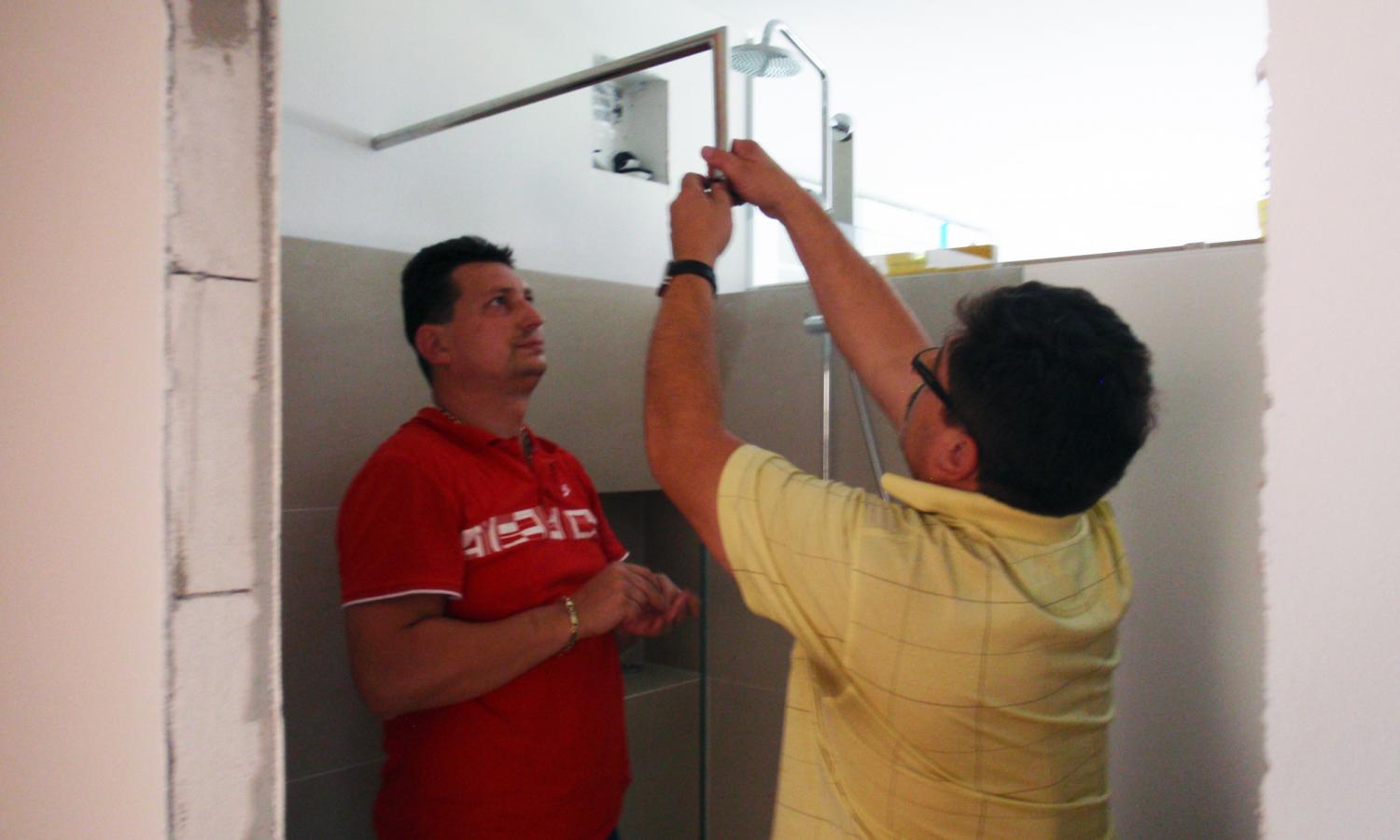 Interior skylight installation took together only few hours, but in total it lasted 2 days. On the first day we installed subtle aluminium profiles, which we sticked down around the opening perimeter. On the second day after curing of adhesives we fitted glass panes of safety glass, which we stucked with silicone to already prepared frames. 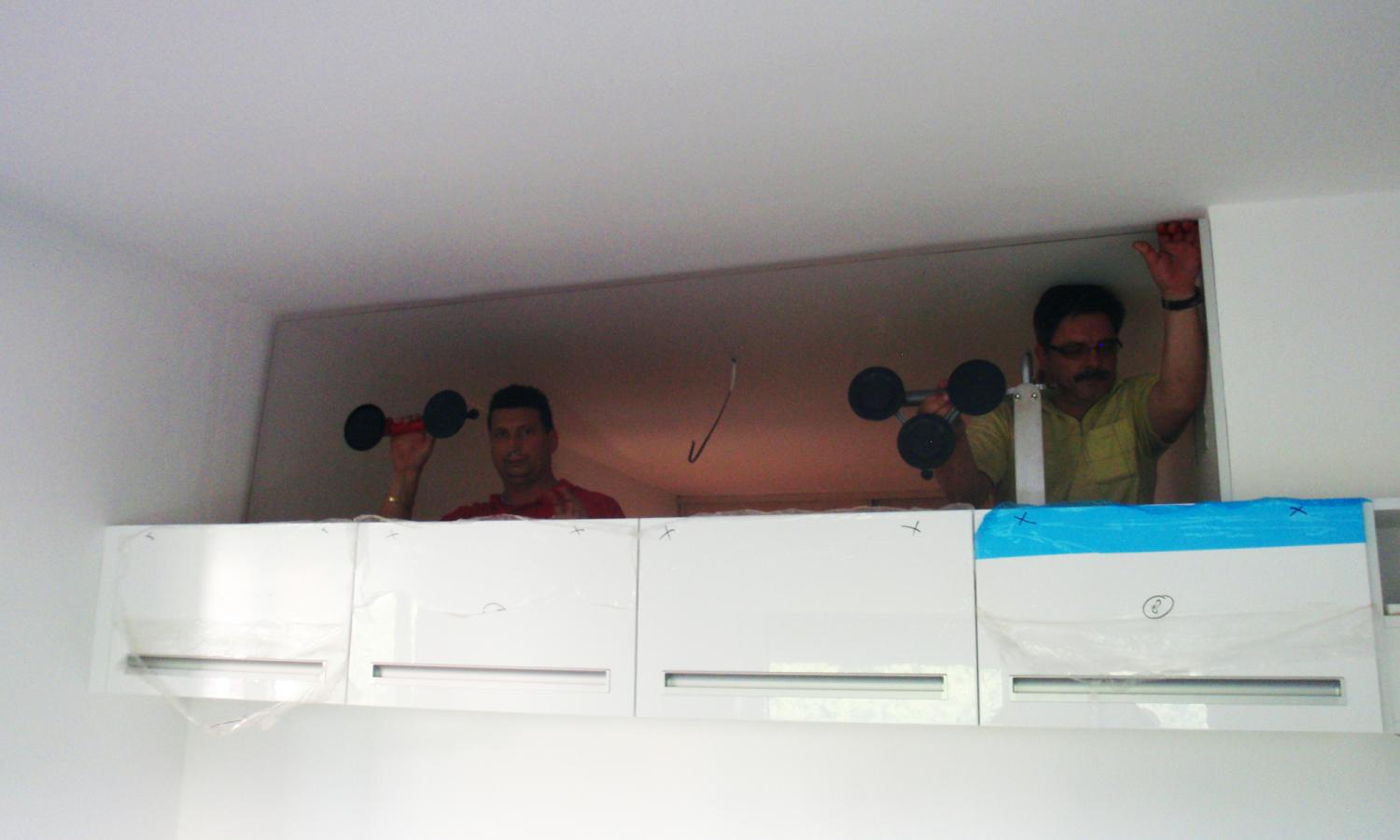 We chose simple white doors into the interior, so it did not take a light from the space. Because old prefabricated panel houses have each opening different, it was necessary to shortened and edited doors at the site. 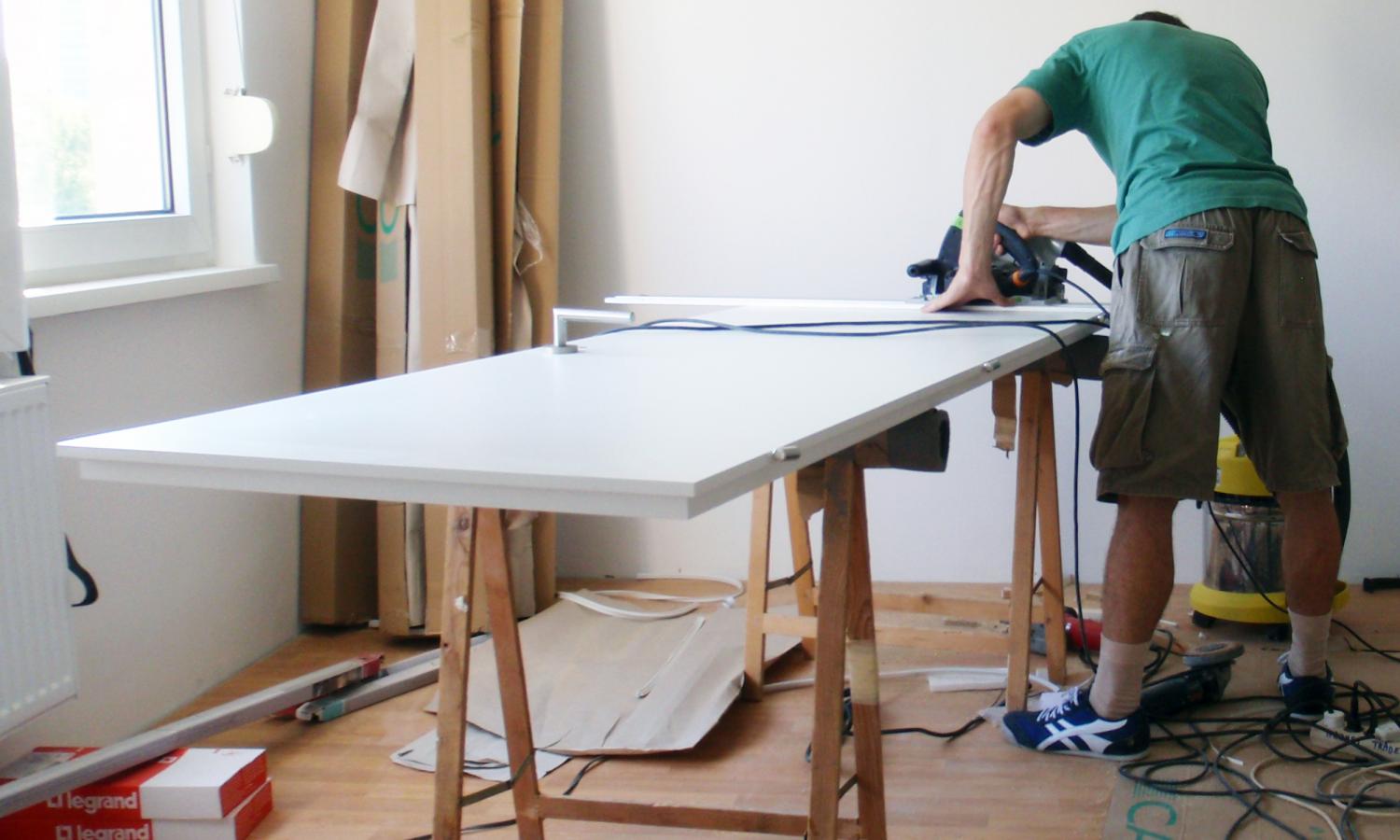 Production and installation of a kitchen made-to-measure

After levelling and first painting decoration of the room we could start with installation of woodwork equipments. Total time of the kitchen installation lasted 6 weeks, woodwork elements installation took two days so it could be done measuring and production made of artificial stone (for about 4 weeks). 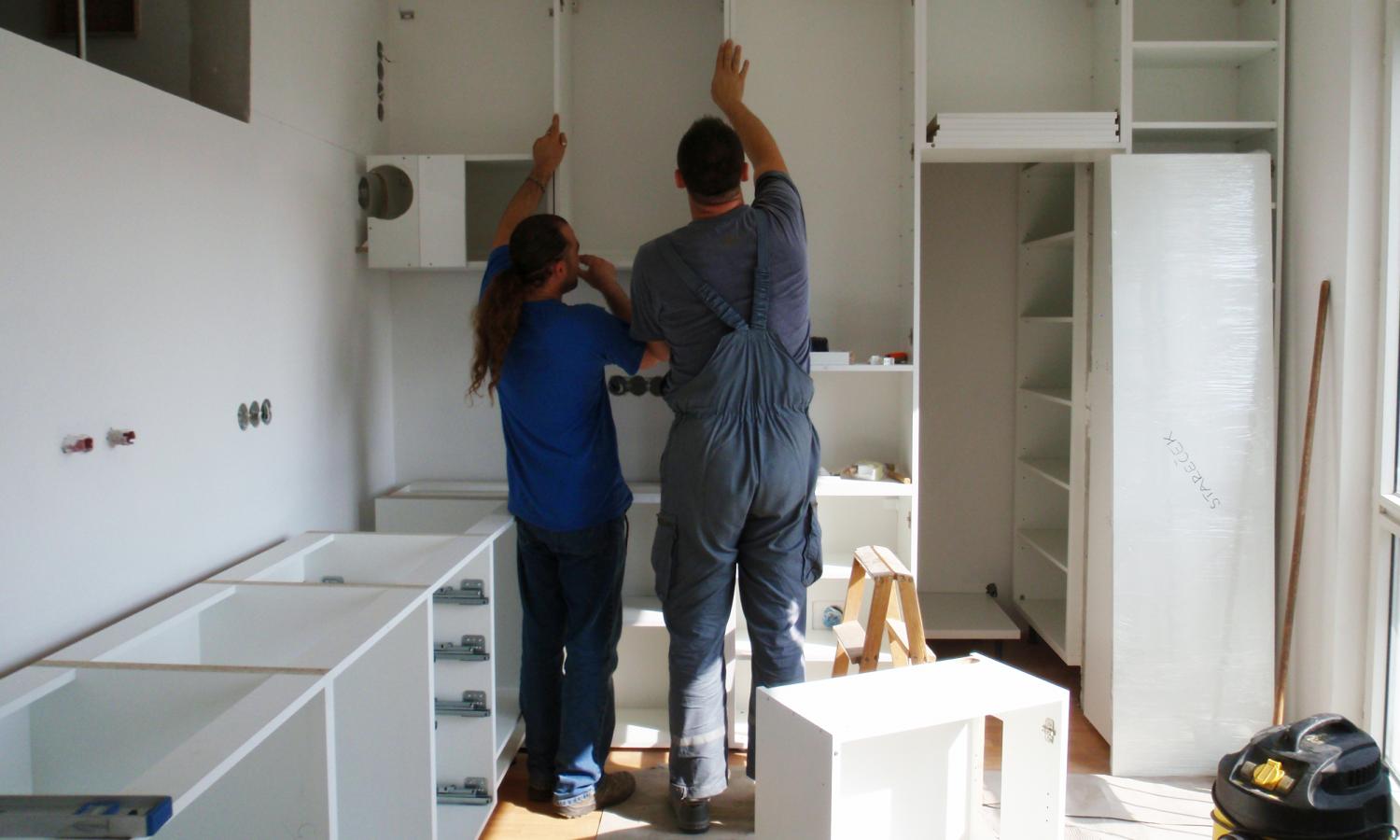 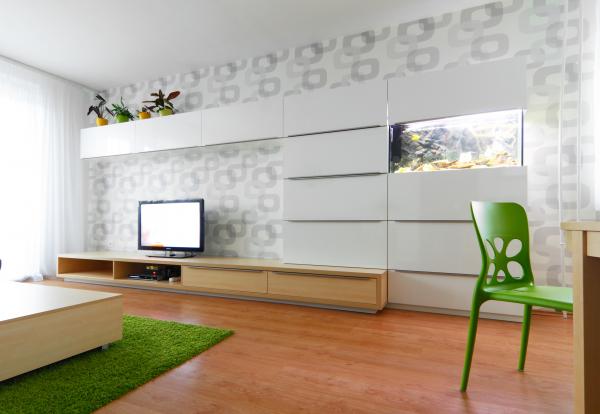 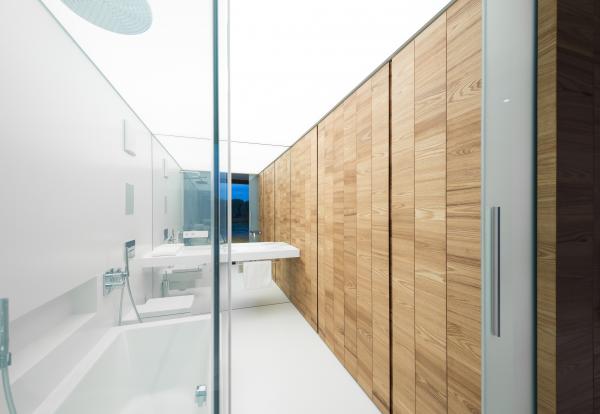 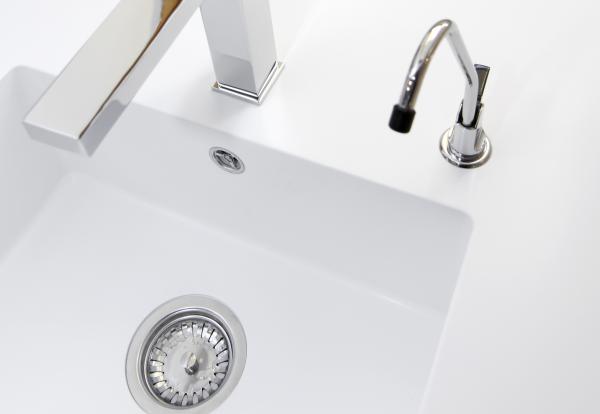 What counterop for the kitchen?

The kitchen countertop has a huge impact on the overall appearance of the kitchen. Many materials are available but thanks to our experience with kitchen designs we can propose you the best materials based on their appearance, maintenance and durability.