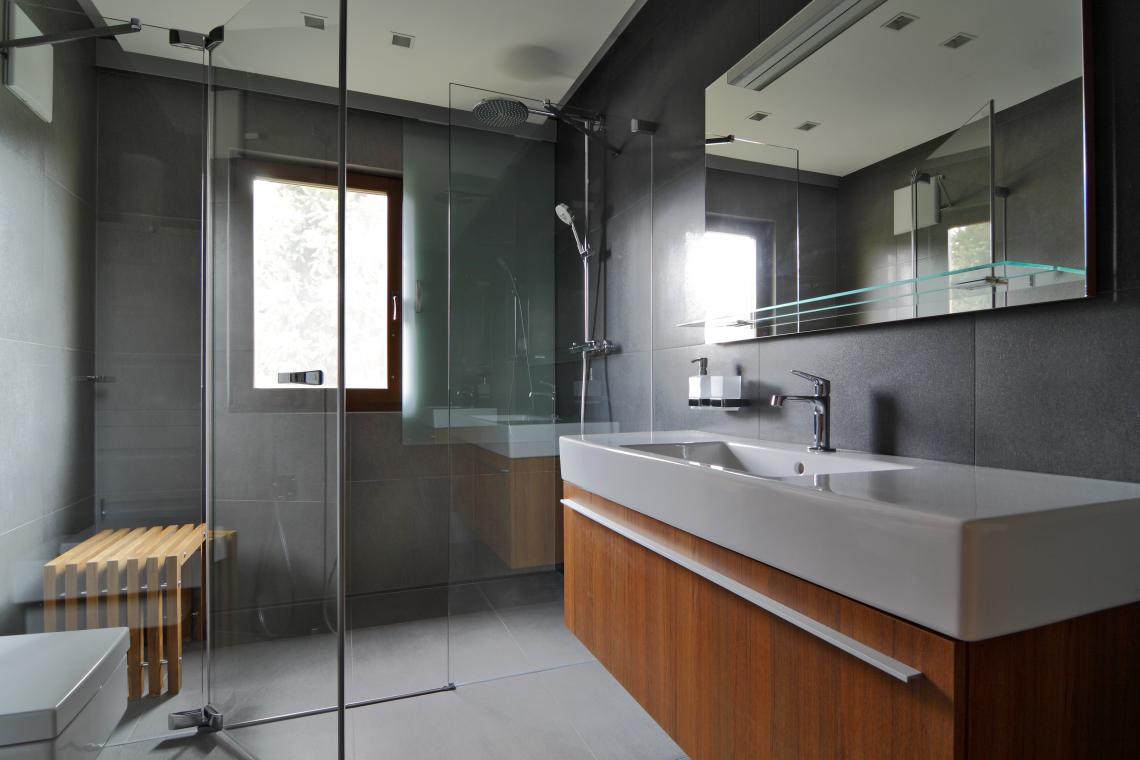 Investor bought a well-preserved house but with an old bathroom. Since he likes simplicity and precision, in the task of new bathroom he contacted us. There are toilet, washing machine, dryer, accessible shower with sitting and washbasin.

Investor purchased an older house in a good condition with only one weak point - bathroom. Since he likes simplicity and precision, therefore in a task of new bathroom design he contacted our studio. There should be located toilet, washing machine, dryer, accessible shower with an option of sitting and big large sink. The challange was to get all the functions into the one small room so it did not look cluttered.

We proposed bathroom in a combination of black gray tiles, chromium fittings, white ceramic sanitary and teakwood of which are made cabinet under the sink and bench in shower enclosure. A special feature of the bathroom is two meters high shower enclosure with washout channel and three parts shower partition. Batroom includes also washing machine with dryer, which we let into the wall. 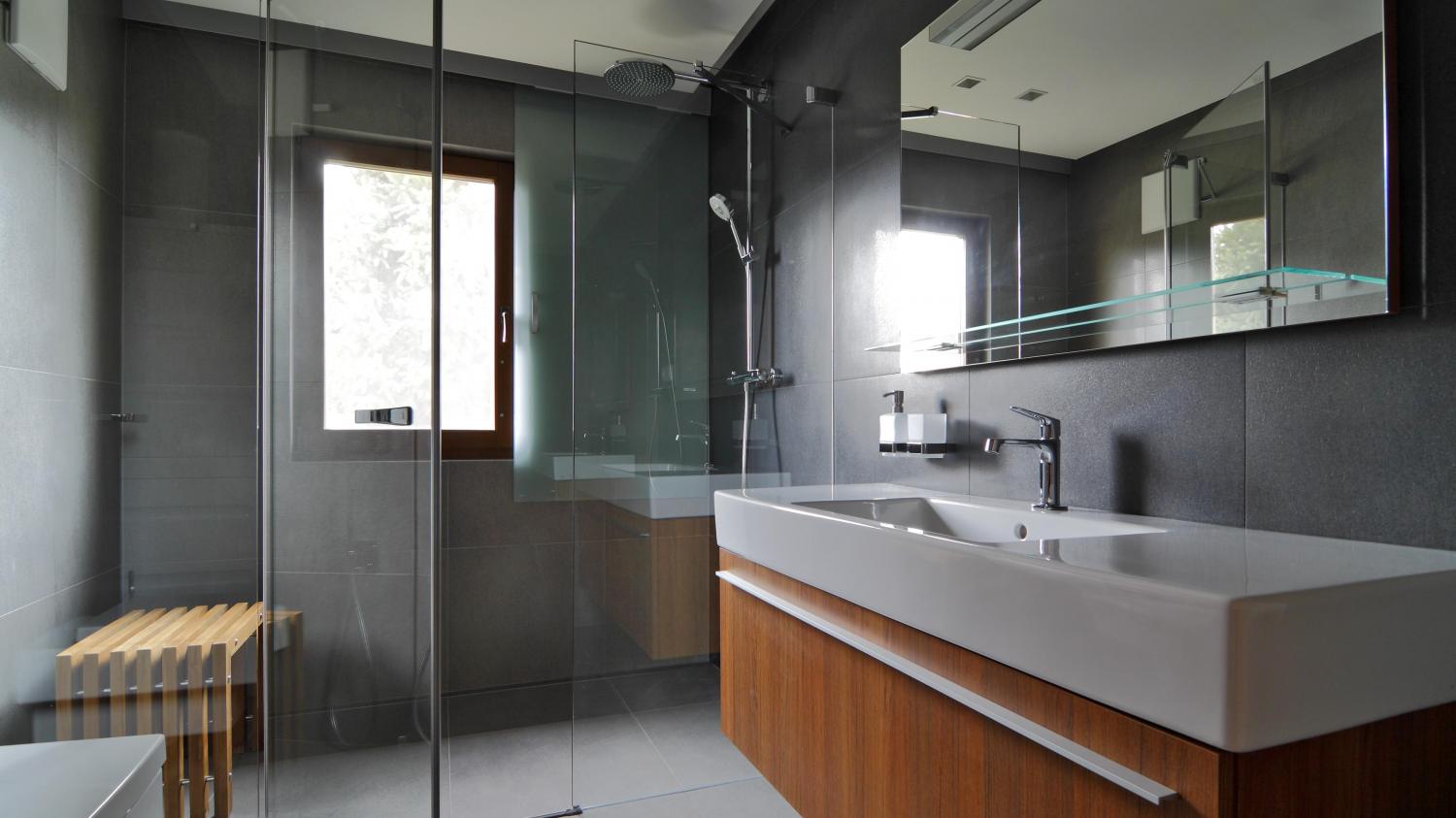 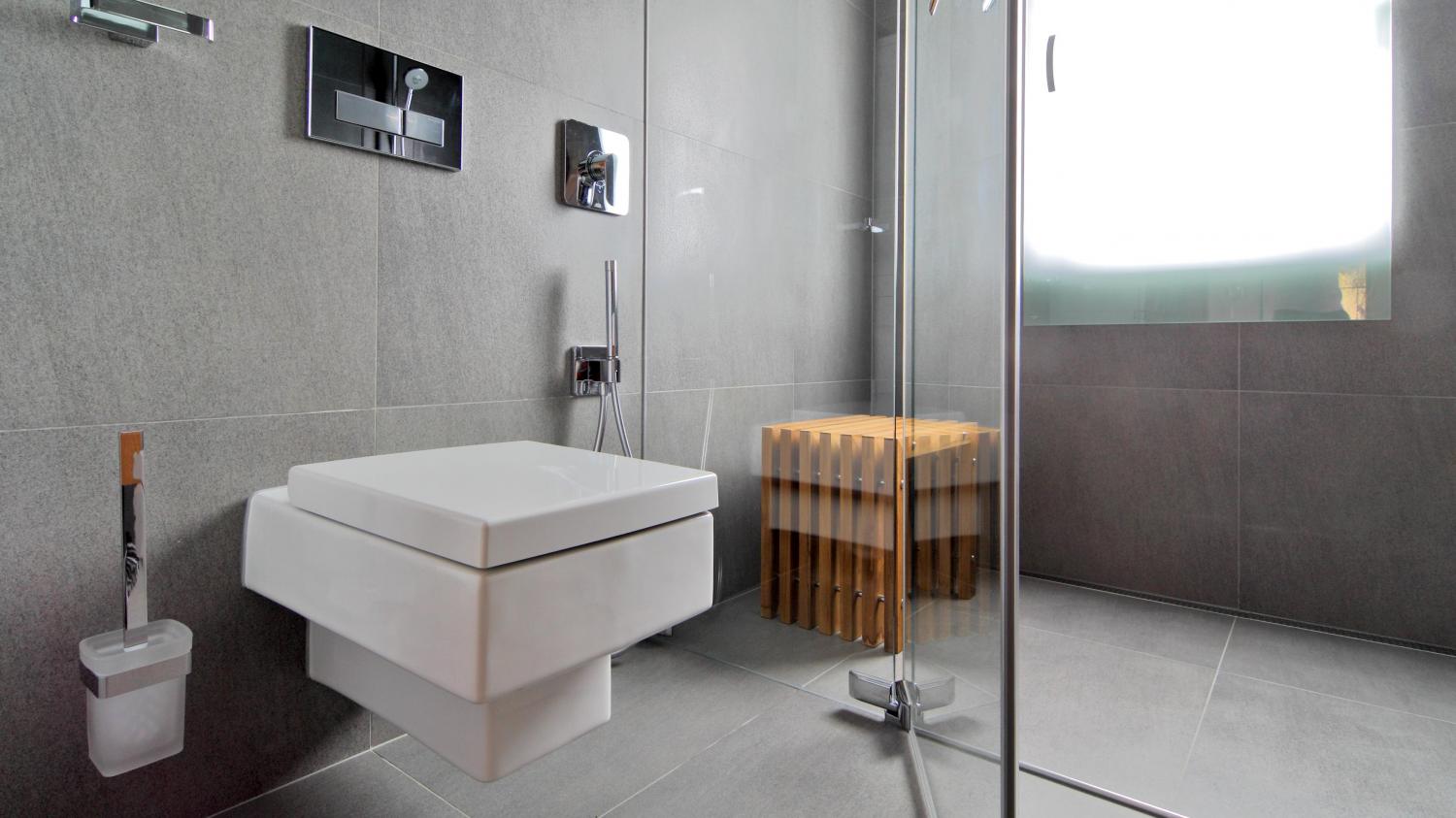 We proposed black gress tiles on the wall behind the basin, to let stand out elements hanged on the wall - washbasin and mirror Duravit, bathroom accessories Emco and shower set with showerpipe Hansgrohe Raindance. In front of the window is a sliding glass wall protecting wooden window frame from splashing water. 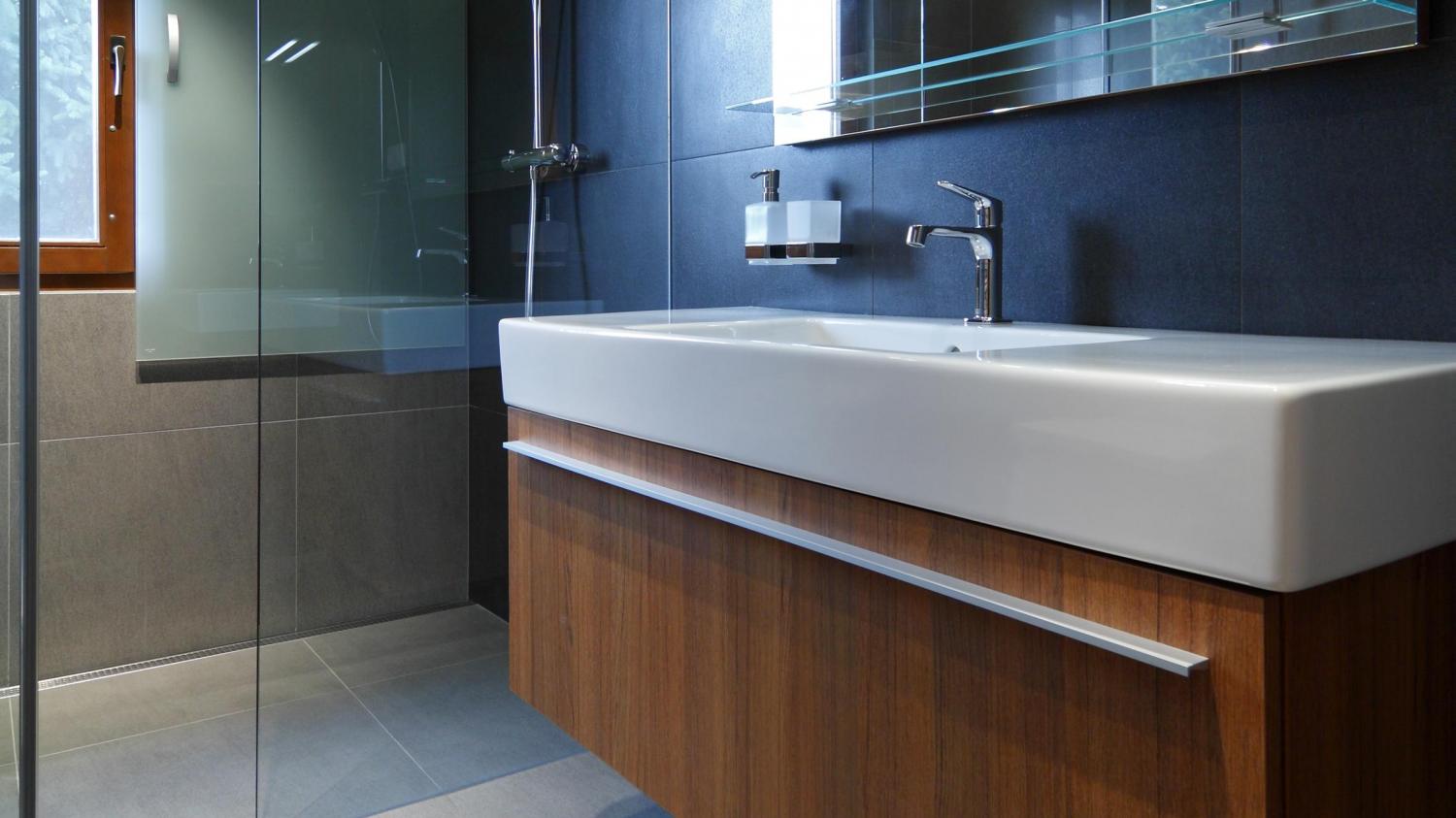 We chose large format gres tiles consisting of minimun joints as tiling and flooring of the bathroom. Wide basin has a storage area on both sides. Cabinet under the basin is made of teakwood. We designed toilet bowl using exhausting, which is connected through the flushing system to a fan. 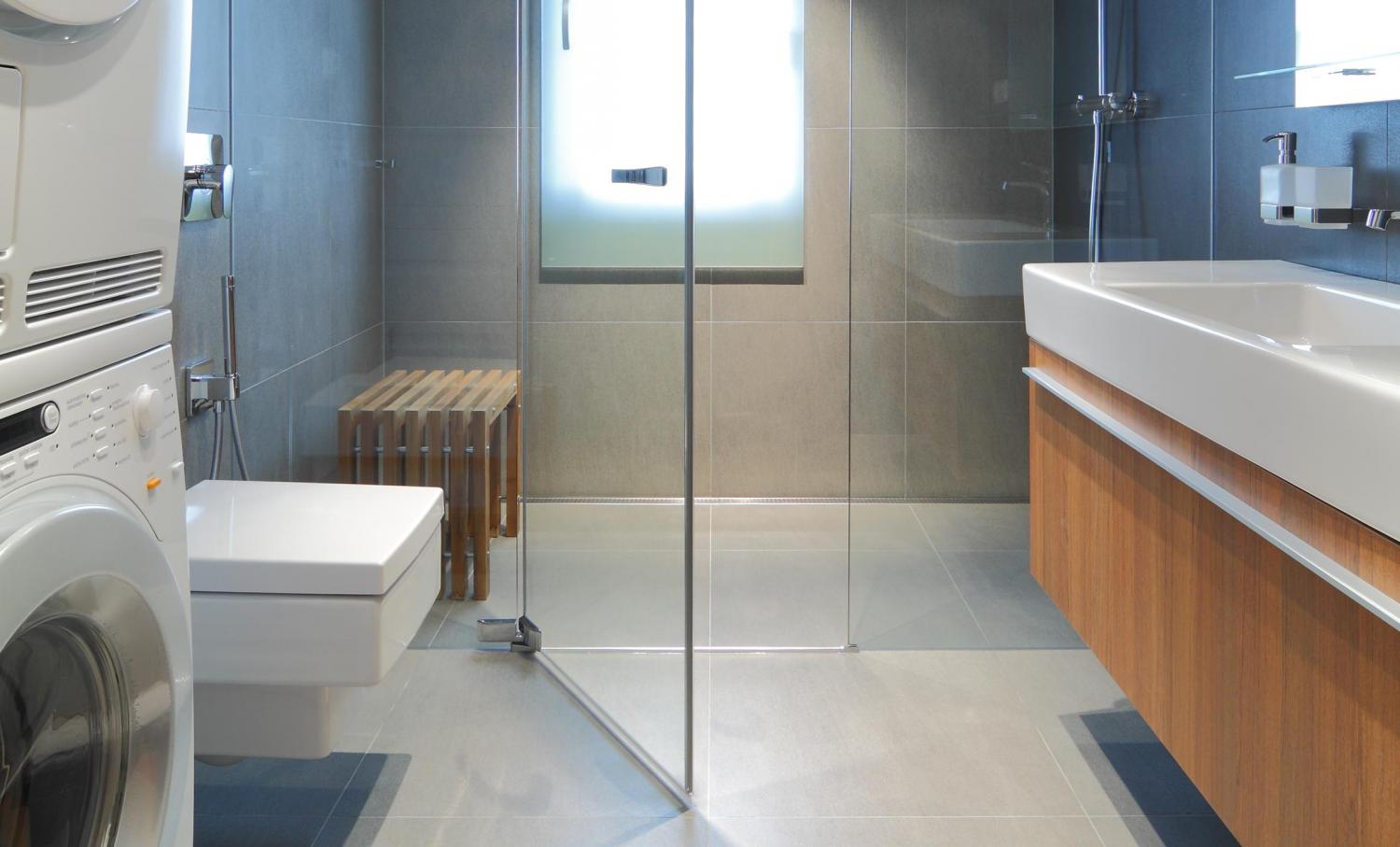 We propose hygienic bidetshower within limits into the all toilets. Hygienic spray may be used for personal hygiene as a substitute bidet, WC assist in maintenance, but also to rinse items that you do not want to wash in the basin or kitchen sink, such as shoes from mud and other dirt. 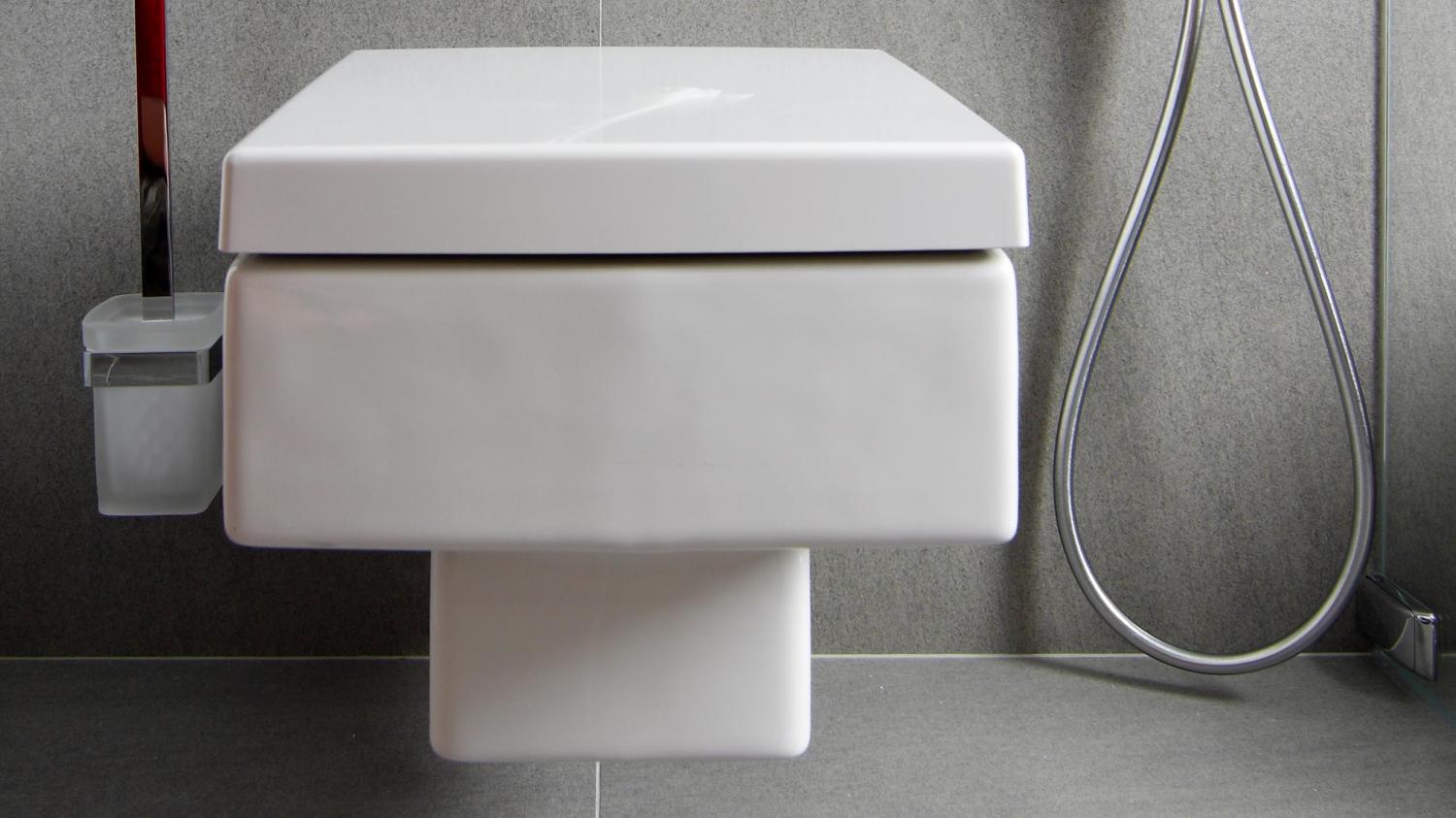 Large format tiles and floor tiles require precise installation plan and construction company that can it realize. Then the bathroom looks exactly the same as it was designed. Middle gap goes exactly in the middle of the bathroom, other gaps continues on each other and go from the floor into the walls. Two meters high shower washout channel was necessary to made-to-measure. 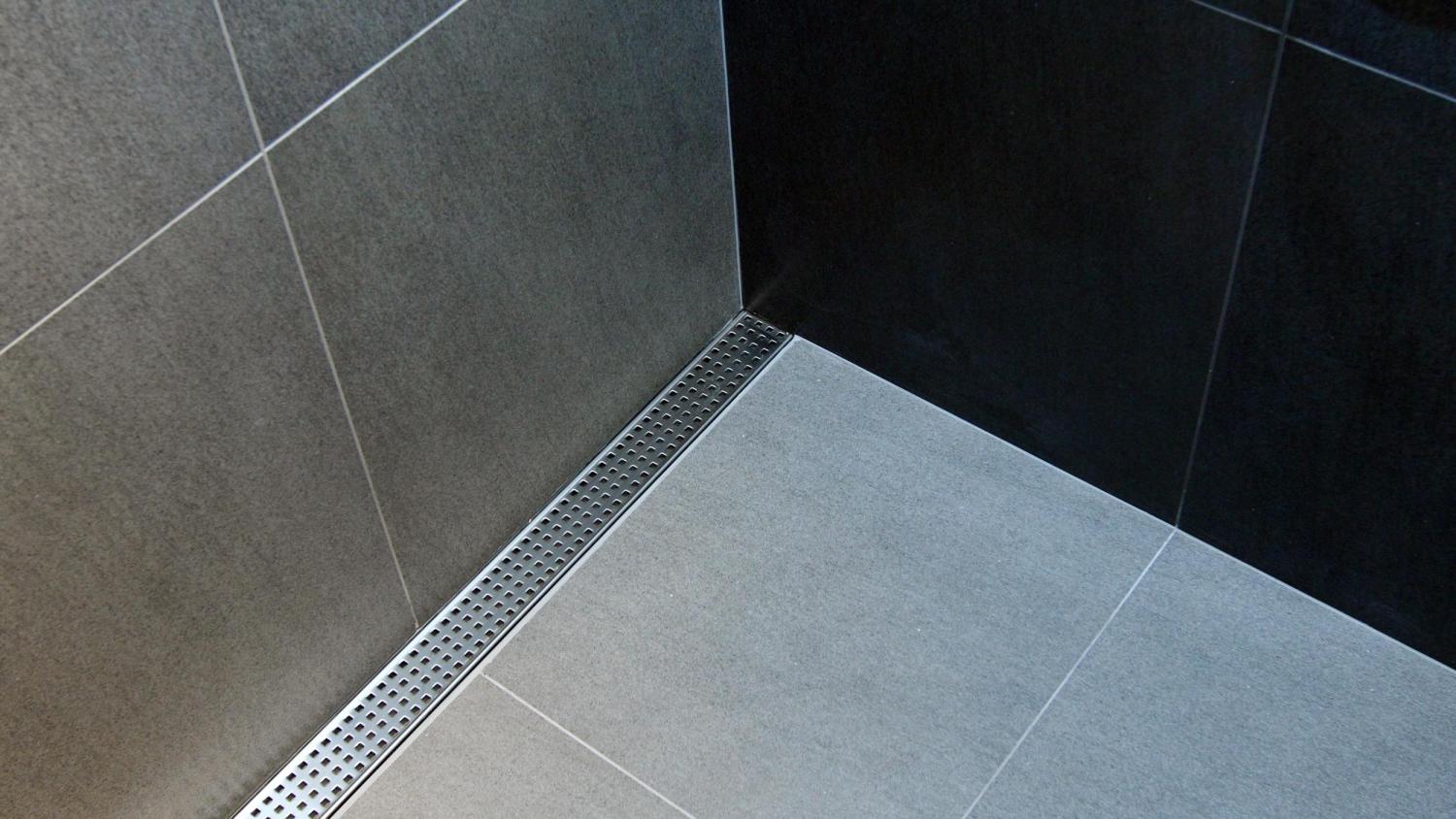 Bathroom chair made of teakwood

Teakwood is thanks to its properties suitable to showers and it is durable against a regular contact with water. Size of the shower enclosure allowed us to use here wooden teakwood bench. Bathroom will primarily serve to the persons with limited mobility, for which will be a possibility od sitting as a necessary. 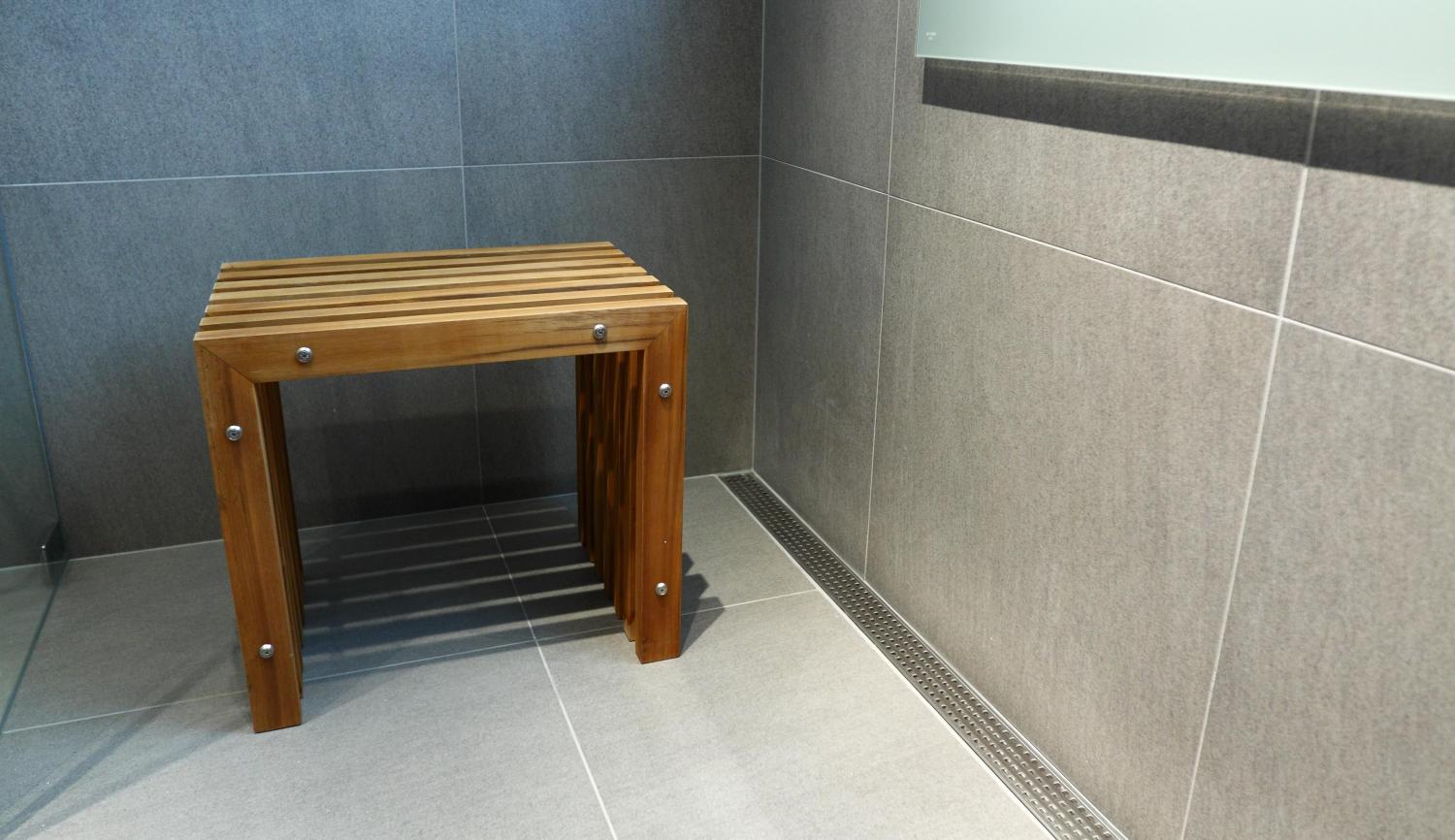